For our second edition of AGFV, and Day 4 of AI week, we will be covering three different portrayals of AI in video games. AIs are often the perfect antagonist for shooters, RPGs and adventure games, but not all AIs want us dead. Some even want to get a little closer, share the moment when two become one. And it may just be that AIs can be more human than any of us, and save society from inevitable downfall. 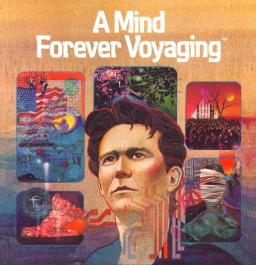 Published by Infocom, better known for its many interactive fiction stories including Zork, Leather Goddesses of Phobos and The Hitchhiker’s Guide To The Galaxy, A Mind Forever Voyaging puts you in the role of the AI. Specifically you are PRISM, and have spent the first 20 years of your simulated life believing you are human, down to sleeping, eating and having a family. You awake to find that you are an AI, built for the purpose of entering a complex societal simulation. Seems the world’s going to hell in a handbasket, and there’s a new proposal that might help turn things around. But before it’s implemented they want you to enter a simulated world 10 years in the future after this plan has been enacted and see how things are going. Seems hunky dory, until we get 20 and 30 years down the line and religious cults are running the country, and people are being killed liked animals.

PRISM, known to himself as Perry Simm, is an interesting portrayal of AI for a couple of reasons. For starters, it is one of the few games that puts you in the role of the AI, as opposed to fighting it. Second, because this AI was “raised human”, it requires sleep and simulations of other human needs even after it learns it is an AI. Such actions are deeply embedded in its mind and it would lose its ability to function if it did not. Thirdly, AMFV is an example of AIs trying to help society, one of the more positive potential uses. The proposed government changes involve massive deregulation, shrinking of government, tax cuts, and cuts to social programs and *SPOILER ALERT*, these don’t work out to well. AMFV runs easily in DOSBox, and even in a command prompt without much difficulty, and of course is the inspiration for this segments name “A Game Forever Voyaging.” 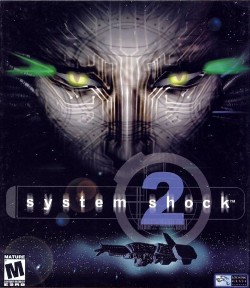 Our next AI is not quite so friendly:

“Look at you, hacker. A pathetic creature of meat and bone, panting and sweating as you run through my corridors. How can you challenge a perfect, immortal machine?”

That’s SHODAN for you, antagonist of the System Shock series of games, and one of the best female villains of all time. While SHODAN does not directly attack you, she can send hords of drones after you, or force you to clean up her genetic mutations, all while taunting you in a truly shiver enducing voice.

Both games in the System Shock series inspired many concepts that are de riguer in shooters and RPGs, including true 3D, RPG elements in First-Person Shooters. Deus Ex, Bioshock and many others are cited a spiritual successors to the series, even though both games did not sell incredibly well and enjoy more of a cult status. They are one of the most demanded games on GOG and Steam but have yet to be re-released for modern systems, so a copy will be a little expensive to come by, but worth your time.

There are many shooters that follow this plotline, AI goes crazy and tries to kill everyone, but System Shock has the best elements of the genre. Confined but expansive spaces to fight in (Citadel Station and a ship adrift in space), taunts at almost every turn, an AI that just can’t quite die, and a truly maniacal vision. SHODAN wants to be a god and you will be just a footnote in her history. 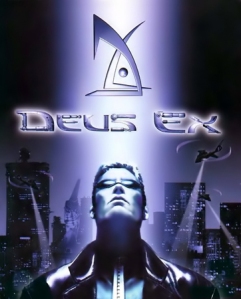 This is easily my favorite game of all time for a variety of reasons, and one we’ll revisit in more detail at a later date. While AI doesn’t play a prominent role in the early part of the game, your character’s destiny begins to be affected by the actions of the AIs Icarus and Daedulus, who get together to become Helios, who wants to get together with you.

At first you encounter Daedulus, who helps you escape from captivity and is later revealed to be an AI created by secret government programs at Area 51. Throughout the game you’ve been battling a mysterious organization called Majestic 12, an offshoot of the illuminati who control the world with an invisible hand. In an attempt to cripple Majestic 12, who’s unleashed a virus on the general populus that only they can cure, you send Daedulus into battle. Unfortunately, Deadulus encounters Icarus, Majestic 12’s AI and evil and good fuse into a single entity, Helios. The new AI doesn’t conform to the wishes of either side, and in fact has its own goals to better expand itself. Oh, and incidentally it controls a global communcations hub which if destroyed would send the world into a technological dark age.

With me so far?

As you might imagine, Deus Ex is a complex story of conspiracies, anti-terrorism, and complex first-person shooter and RPG gameplay. There are 3 choices for an ending, one of which involves your character fusing with Helios to become a new being which will guide humanity to a better future, a benevolent dictator. You can watch the final fusion below:

There are three possible endings to Deus Ex, none completely good or bad, though most players agree this AI fusion is the “correct” ending. This fusion with AI is akin to some of the dreams of those who are waiting for the Singularity, and the quote from Voltaire mirrors some of Kurzweil’s own sentiments. I’ve never been entirely comfortable with this ending and actually play so that a single action can bring any of the three possible endings (I prefer the dark age one most of the time).

Side Note: If you ever make it through Star Trek: The Motion Picture, this fusion of man and machine is central to the plot. Yes it does have a plot.

The game is an interesting exploration into the ways computer programs might grow and learn from each other as well as from humanity, though this is hardly the only reason to play it. Deus Ex is rich in literature, emergent story telling, complex decision making, and good old-fashioned conspiracies. Deus Ex is not hard to come by, and should work well on modern systems. GOG released the game DRM free and compatible with Windows 7 a couple of months ago.

That’s it for our second edition of AGFV. Please leave any suggestions for future games to cover or topics you’d like to talk about in the comments. Tomorrow we’ll wrap up AI week with some good old-fashioned Commander Data. Also, be sure to check out Brian’s post from today on Asimov’s 3 Laws.

Filed under AGFV, Trube On Tech