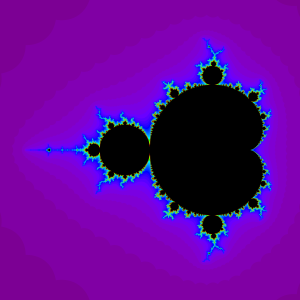 “What’s that on the front, some kind of insect?”

“A fraggle? I think that’s a little vintage even for you, Dave.”

“What sort of fractal?”

“Well if you must know it’s the Mandelbrot Set.”

“Well it’s how the whole thing works when you run it through an equation or something. It’s really complex.”

“Uh huh. Those supposed to be it’s wings?”

“The little round bits on top and bottom. What kind of an insect has round wings anyway?”

“Bees I suppose … wait, they’re not wings and that’s not a bum. It’s a Mandelbrot Set!”

“Not what, who! This is named for the man who discovered it, Benoit Mandelbrot.”

“Ah, French then. That explains a lot.”

“Well, it’s rather abstract isn’t it? Maybe a sort of modern impressionist.”

“It’s a bloody math problem, not a painting!”

“Now, now, no reason to get upset. What kind of a last name is Mandelbrot anyway?”

“I think it means almond bread.”

“I dunno, bread with almonds in it or something.”

“So mandel is almond? Seems like they just switched the letters around a bit, almend maybe.”

“It’s a name like any other. Yours is Liverpool and I don’t think you’d taste good with a side of onions. And you’ve never been a good swimmer.”

“Your Mandelbrot shirt or whatever.”

“Honestly? I don’t know. It was either that or something called a Douady Rabbit.”

“No, Douady, honestly are you even listening to me?”