It’s been an off month for the writing, and the first week of January didn’t shape up too well either, what with the being sick and all. A few days of sitting on the couch reading comic books (mostly Y: The Last Man) and watching The Cosby Show on Hulu+ set me on the path to the mend, so here I am, your thrice weekly voice in your inbox, or wherever you read this blog.

Thursday is the two-year anniversary of the blog. If you’re interested we’re registered at Amazon, Bundle Dragon and B&N if you want to buy gifts (just kidding). Believe it or not, the blog was not really a New Year’s resolution back in 2012, which probably explains why I’m actually still doing it. It was, and still is, a great place for me to write about things I normally don’t make the time for, whether it’s thoughts on writing, little short story ideas, experiments, or the occasional techno-babble tirade.

I’d be concerned about the month gap in working on my novel were it not for the fact that this seems to be the way I work on every project. Observe:

1) My first finished novel draft, Atlantia, took four years to complete (back in highschool). At least 70% of the book was written in the last year.

2) Surreality’s initial draft and subsequent drafts were worked on steadily for a month or two, dropped then finished in a fit of productivity.

3) DM had about 30K words written before I set it aside for a while, then added another 170K words in about four months of straight work.

I wish I was the kind of writer who stuck to the X words a day every day way of working, and indeed I can keep it up for long periods. But something always seems to knock me off the rails for a bit. And when I get back on them it’s like I’ve thrown the third red log into the train to get it up to 88 MPH: 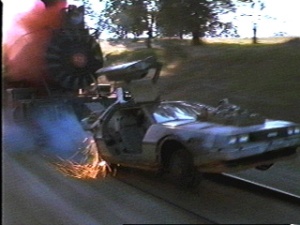 I also seem to have a sinusoidal curve when it comes to ridiculous turns of phrase. My wife/editor tells me it’s every other chapter. I thought it had to do with my writing quickly, but even my slower 800 word per day pace has produced a few sentences that were upside-down and backwards, so to speak. This is after I’ve read the words out loud even.

The trick to fixing it seems to be distance. No matter what my pace, if I’m looking at something I wrote today, I’m probably not going to find every flaw. Which admittedly is why some of these blog posts are a little imperfect, thank you again for your understanding of this. But put a week between me and the piece, and suddenly I am an editor again.

One more quirk. When I was shooting for 1600 words a day it took about an hour. Now that I’m shooting for 800 words a day it can take 30 minutes to two hours! I think some of this has to do with endurance training. If you write 1600 words a day for many days, it will seem normal and a reflex. My 800 word pace is a little more in flux because of trying to decide between rewriting, reworking or regurgitating existing text (okay not so much that last one but I could come up with another “re” word. Maybe reconstituting?). When I blog, 500-600 words comes easily in 25-40 minutes, as long as I’ve been consistent the last few weeks. Today for instance, it’s a little longer.

What are some quirks to your writing process? Are you pretty consistent, or a little more see-saw like me?

Tagged as Back To The Future, Blogs, Quirks, Random, Writing