At the risk of you guys thinking all I do is read comic books these days, here’s another roundup of NetGalley comic and graphic novel titles. Most of these have a deep science fiction or fantasy bent (which is probably why I enjoyed them a little more than last week’s bunch). Half of these titles I actually knocked back during a power outage at work last week (the third this year, thank you AEP). Hopefully you’ll find something to pass the time while you’re sitting in the dark 🙂 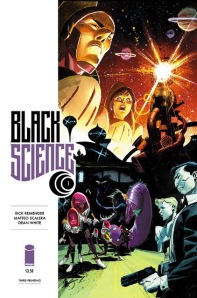 If you’re looking for an action packed imaginative space pulp drama, than this title is for you. Grant McKay has done the impossible, created a device called the Pillar that allows him to punch through the barriers of reality and travel through the eververse (nice alternative to the multiverse). Each time a choice is made a new world springs forth from all the possible options for that choice, adding layers to the onion. At the center of the onion may be the very first being in existence, the one who created the universe.

But McKay and company have no time to worry about that when the pillar is sabotaged and sends them jumping at random intervals into all sorts of parallel worlds. As a narrative technique this gives the author the freedom to do just about anything, and he definitely takes that opportunity. From mecha-indians fighting nazis, to frogs with electric tongues, creatures and cultures of all sorts of imaginative sorts are sprung throughout. And of course other versions of our main characters. And believe me, no one is safe. If Remender keeps killing off characters at the rate he has been so far, the title will only be able to run for about six more issues.

The beginning can be a little tough to get your orientation, especially with a number of female character names thrown at you all at once with their relationships to main character unclear. But with a few helpful flashbacks and a lot of color you can get right on track. I tore through this in a single evening and can’t wait for the next installment. Just pure fun and adventure. (5 out of 5)

Gate-Way reads a lot like a post-apocalyptic novel, though in this case the barren landscape is purgatory rather than a post-nuclear hell-scape. Our main character is an undercover cop who’s killed in a drug bust gone bad. He awakes to find himself and the dealer’s dog in an alley, seemingly unharmed. But soon it becomes apparent that something is wrong when one of the dealers he shot turns into something called a dark soul, with dark black eyes, and an animalistic nature.

The world of purgatory is tough. All of the buildings and supplies pass into that world through the dead (though the exact method of this is unclear). One group has created a city called Hopetown, designed to protect its citizens from the Dark Soul menace, and to find out whether they all are really dead or just somewhere else. Anyone who has committed suicide, or is into drugs, prostitution or unsavory activity is banished from Hopetown out into the wastes, and Hopetown’s opposite city, Freedomtown. Our cop isn’t really interested in becoming a part of any of these communities, just in finding a younger brother who may have passed over after getting in with the wrong people, and finding out more about the dark souls.

The tone is gritty and fast-paced. Every panel is drawn with muted colors. The artist has a decent command of facial expressions and a variety of diverse characters. The architecture all looks grey and brown and busted out, filled with abandoned warehouses, boarded up windows and busted cars. The most redeeming character in the narrative is the dog, who serves as faithful companion and partner to our main character. Otherwise the tone is grim, and likely to get grimmer. Comic books can serve as an escape, or to highlight an important message about something in today’s society. This story seems to do neither, unless the author things that all of humanity is destined to descend into our baser instincts. In short, violent, dark, grim, etc. (2 out of 5)

The Bunker by Joshua Hale Fialkov and Joe Infurnari 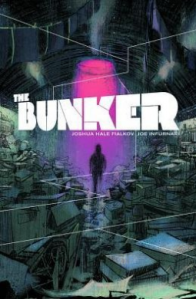 What if you knew that you and your four friends would bring about the end of the world (or at least the deaths of most of its population)? And what if that future had to happen or everyone would die?

That’s the basic premise of The Bunker. A group of five friends goes into the woods to bury a time capsule, only to find a capsule from 15 years in the future, with messages from their early selves telling of them of the path their lives will take, and how each of them will critically shape the world. The letters also reveal secrets each of the friends has been carrying and forces them to confront some of those challenges earlier in life in the hopes of bringing forth a brighter future (though still one in which most people in the world are dead).

The whole comic is drawn in almost blurry flashback. This can make the characters lack definition and be difficult to tell apart at moments. Also, the lettering of the letters is done in cursive which can be equally difficult to parse, especially given that this is where a lot of the critical details of the story are given. The colors are a lot of pinks and blues contributing to the washed out look of the present and future. As a narrative choice it conveys tone, but also makes the comic harder to actually read.

It does raise some interesting questions though, particularly when one character allows some people to die in an explosion so that he can be seen as a hero saving the others. Should future events be allowed to play out as they already did, or should you fight to change them, given the new knowledge you have. I have a feeling this title will get better as it grows the world. The transition between present and future events is handled well, revealing details at a pleasing pace. (3 out of 5)

Described as “The Dark Crystal meets Saga” (though thankfully not as filthy), Umbral takes you through a dark fantasy world where the kingdom is being invaded by shape-shifting creatures with grins wider than their faces called Umbral. During a rare eclipse a young thief named Rascal attempts to steal a magical artifact called the Occulus and comes upon the Umbral who’ve just killed the king and queen and aim to take their place. Rascal steals the Occulus from out in front of them and finds herself in the world of the Umbral, a dark and dangerous world running parallel to our own. If you ever played either of the Soul Reaper titles in the Legacy of Kain series you’ll get an idea of what this is like.

Rascal then journeys between the Umbral world and the real world to discover the true nature of the Occulus and to expose the Umbral invasion of the kingdom. Along the way she acquires a variety of amusing companions who aim to escape and regroup. She also discovers that people can manifest differently in the Umbral world, and takes her first tentative forays into magic, which she despises.

This title has a good sense of humor, and a great pace for world building. The creatures are dark and creepy but not in a gross way (though they do have a lot of teeth in those grins, kinda reminds me of the rat creatures from Bone). Little by little we find out more about Rascal, and the world in which this drama is unfolding, and the origins and legends of magic. And the end leaves us with a bit of a cliffhanger, not knowing who to trust. An enjoyable fantasy adventure with a diverse and funny cast of characters. (4 out of 5)