Well, I’ve been meaning to write this post for a couple of weeks now, and finally have a good morning to sit down and do it. As I’m typing my fingers are being gently massaged by my vibrating keyboard as my laptop does burns. Again, these are all books I received from NetGalley in exchange for an honest review, including Pride and Prejudice which I actually had to request (more on that later). 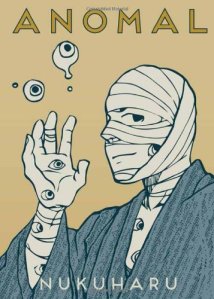 This is actually a collection of stories from indie Japanese Authors, published by Gen Manga Entertainment. The cover story is so-so, featuring a man with a hundred eyes all over his body helping a man to see, but then holding that gift over him. “You know those eyes I gave you? Pretty great huh?” We’ve got a detective who solves crimes by reenacting the actions of the murderer and victim with his male partner (so if you like a little yaoi action there you go). The later stories are more interesting, in part because they stray into weirder territory that seems very distinctly Japanese.

Next is a man falling in love with a demon (yokai), who he’s known since childhood. She mainly loves for him for the delicious spells he utters, and even gives him the chance to turn back the clock when he is nearly killed by demon spirits, to live his life again happier. But my personal favorite of the collection is the girl who wants to hug demons (even if they don’t want to be hugged). To accomplish this goal she tries to become head of the demons with the help of her guide, who also happens to be her schoolmate. In this case the demons possess a human carrier, and manifest by being vaguely ghostly creatures with cute pig eyes, a jagged mouth, and little horns. What’s not to love?

The translation on a few of these might be a little rushed, and admittedly none of this is top-grade material. But the art is excellent and varied between the different authors, and the dialog is punchy in spots. There’s probably something for everyone to love in this collection. Most of the stories have a pretty light touch, so don’t expect horror in the traditional sense as you might have assumed from the product description. (4 out 0f 5)

Outlaws of the Marsh (Volume 1) – by Wei Dong Chen

This is a manga adaptation of an ancient Chinese epic (which is sometimes also known as the Water Margin). This is an epic in every sense of the word (the Amazon copy of one of the more well-known translations of this story is 2008 pages, the sample alone feels like a book). 108 spirits are let out into the world and must be defeated.

The main story revolves around Jin Shi, as he goes from being a brash young man to a trained and disciplined fighter. There have been many inspired manga adaptations of this story, including Outlaw Star (a sci-fi Anime in the vein of Cowboy Bebop). This title does not live up to some of the other works in this genre. It is clearly aimed at children, and the dialogue is painful. Just about every awful foreign film trope is in here. Presumably the original is in better shape, though it’s hard to tell.

The artwork is blurry and again looks like something out of a child’s picture book. Even in the action sequences, you get little sense of the motion of the characters, and their expressions rarely vary. The main benefit to this story is making me aware of the longer epic which I might read some year when I have the time. (2 out of 5) 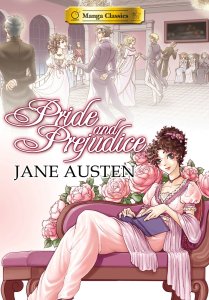 I’m giving this book three stars, which if anybody knows me is like someone else giving it five. I’m not particularly a fan of Jane Austen’s work, but as is the case with a lot of NetGalley stuff, this seemed too weird to pass up.

The artwork is more in the style of Revolutionary Girl Utena, with pointed chins and sour expressions, though I swear the father is cribbed from the dad in Fullmetal Alchemist. The adaptation is pretty straightforward, with bits of humor in tipping the mother into full anime stereotype, with stars for eyes as she dreams of marrying off her daughters into money. The book proceeds in chapters which I assume correspond roughly to the chapters in the novel (though I’ll admit I didn’t pick it up to verify).

Probably the best bits are the little four panels comics in between chapters, that adapt more humorous or speculative scenes from the book. Even as I found myself wondering what the hell any of these people would want to do with each other, these comics gave me a chuckle. Again, if I was going to read Pride and Prejudice, this would be the way to do it. (3 out of 5) 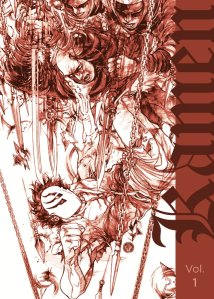 I actually caught a snippet of this in the Gen Manga collections sold on Amazon and had been intrigued, so I was pleased when I saw this on NetGalley. A man wakes up wearing a talking mask. If he takes it off, he will die, and because it is covering his mouth, he cannot speak. Throughout the whole volume, we learn only about the man through his actions, and the commentary of the mask which can sometimes be kind of funny.

The man is captured and brought into servitude in a castle under siege. The female leader of this group has challenged an outside opponent because of their corrupt ways and now faces the potential annihilation of her people, all while dealing with her uncle and his own political machinations. The masked man takes to protecting a young nearly dead girl and at one point fights off dozens of opponents while carrying her in one arm.

Much more of an action comic, this does fight sequences very well, and the design of the mask is intriguing and even vaguely familiar. I would suggest skipping to the back of the book for the character descriptions and some background information on the time period and geo-political situation. I found this a little confusing just from the information provided in the story. Overall, I’m interested to see where this is going, and was pleased to find Volume 2 now available on NetGalley as well. (4 out of 5)