I think all of us who have the writing bug have put on at least one of the affectations of the writer. This can be something as small as always writing in a coffee shop (which admittedly I’ve done twice today), to something as gauche as a beret (though that’s more of a poet than a prose thing).

Here’s a list in no particular order of some of the writer-y things I’ve succumbed to from time to time (and some of the realities afterward):

– Walk out in the middle of the night wearing a trench coat looking to observe the world after dark. Spend evening in Buckeye Donuts only to later regret eating a gyro at 2am.

– Try to write all night, end up playing video games instead.

– Buy fancy notebook with a leather binding and a Celtic cross pressed into the leather. Fill maybe 10 pages of this, then keep it on your shelf saying you’ll finish it someday.

– Write out on the porch while it’s raining.

– Get yourself all moody by listening to sad music, then write a depressing scene.

– Write without a censor (punch the keys damnit)!

– Write after drinking yourself jittery with caffeine.

– Keep a writing ideas notebook by your bed. Eventually pile Kindle or comic book on top of it.

– Scribble notes on random scraps of paper. Be unable to decipher notes afterward.

– Grow a beard, or a mustache.

– Talk to yourself in a public place.

– Talk to yourself and hold both sides of the conversation.

– Carry around a binder filled with a thick copy of your latest draft. Take out a pen and start marking it up. Frown occasionally, sip coffee purposefully.

– Write outside under a tree.

– Pull out three tablets and be checking your draft on all of them.

– Look up to make sure people wonder what you are doing, even though everyone is typing with laptops.

I don’t think there’s anything wrong with trying one, or even all of these. In fact the writing life wouldn’t be fun without our little pretensions, the things we do to actually feel like a writer. Part of this is about ego, not just the ego that makes us think anybody will want to read what we have to say, but also that we have the creative temperament, that we stand apart from the crowd.

That said, make sure at the end of the day you’re actually doing some writing, and not just playing at it.

*For the record, writing naked is awkward, not so much because of the naughty bits, but because I have a very hairy chest and it’s kind of distracting. 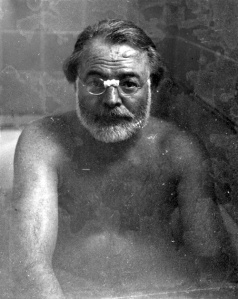