As part of our new format for 2015, I’ll be posting reviews of two books (usually graphic novels or manga) every Friday. Today’s two titles are each crime dramas, the first a police procedural that dips into political intrigue, and the second a noir-thriller also with political overtones. But the kicker to both is that they take place … in space!

The Fuse Vol. 1: The Russia Shift 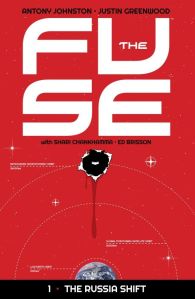 Just moments after stepping onto the Fuse, an orbiting energy platform more than five miles long, new detective Ralph “Marlene” Dietrich is swept up into the murder of two cablers. Cablers live in the station’s service ducts and are often mentally handicapped or just poor and homeless, and as such few people on the station are interested in what happens to them. His partner, veteran detective Klem Ristovych, is surprised that Deitrich volunteered for this assignment, and is unimpressed with his 3 years on the force in Munich. Together they must work to find out how these cablers are connected to the mayor’s office and why one of them was carrying an expensive phone card and locker in the shuttleport.

This a gritty police procedural involving the clash between the upper and poorer classes, and the secrets that both are hiding. Humor abounds throughout, as the two partners get to know each other better and dive deeper into the case. The language can get a bit salty at times, though never in an obtrusive way, and it lends authenticity to the interactions of an undermanned, underfunded police force.

The Fuse itself is an interesting setting, similar in some ways to the space station on Babylon 5, and offering all sorts of locales from stunning orbital views of the earth, to the deeper dark tunnels where the cablers live. Greenwood’s art is angular and expressive, and gives you a sense of the tight confines of this city in space, with more than half a million people living and dying inside it. As such, there are many more stories that can be told here, as well as diving deeper into Dietrich’s past and motivations for leaving Earth.

Fast paced, suspenseful and surprising, the Fuse will draw you in and keep you there until the climactic finish. It wouldn’t surprise me if this was adapted into a crime drama for television some time in the near future.

Former investigator Cal Talmadge has been brought out of forced retirement to help the NSS (New Solar System) military find a missing Mercurian ambassador’s daughter, on the eve of peace negotiations held on Mars between Mercury and Venus. A number of players from the Neptunians, to the gangs and government on Mars, don’t want to see an alliance and will risk going to war to prevent it. In the midst of all this Talmadge must work with contacts old and new to find the ambassador’s daughter, and get to the heart of who is trying to break up the treaty.

Red City is told in a very noir style, complete with a knowing narrator giving humorous asides and foreshadowing throughout. While Corey tries to weave a taught kidnapping mystery in with intra-stellar intrigue, there almost seems to be too much back-story. A number of past historical events, and complex geo-political relationships are mentioned but not fully explained one right after the other. This makes the story feel more like setup and less like plot. While a number of action pieces happen throughout their relationship to advancing the plot is not always clear.

Dos Santos art style is imaginative and detailed, making Diecidue’s seem messy and scrawly by comparison. The lack of a consistent look in a four issue arc takes away from the narrative and makes it harder to distinguish established characters and races. This is especially evident in the scenes from the first issue that are flash-forwards to scenes in the last issues. Most aliens seem distinguished by a slightly different color and a few bumps (and occasionally sharp teeth). Mars itself is barely distinguished from Earth and the chase scenes involving driving a sports car into the sewer way under a bridge seem unnecessary homages to B-movies the author has seen. In short, except for a few introductory and exit scenes, Mars doesn’t look very Martian.

Maybe future arcs will fill in some of the gaps left in this story, but while I’d happily buy more issues of The Fuse, Red City will need to work a little harder.