Okay, I’m sorry I missed Thursday’s post. I was tired and my bed was  inviting, the single most dastardly obstacle to any writer. However, since I am on my own this evening I thought I’d try a little marathon reviewing. I’m going to review as many books and comic books in a single post until my computer loses charge, my fingers fall off, I run out of things I’ve read, or my wife comes home. 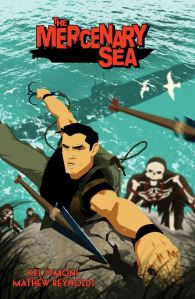 On the eve of war a group of misfits and outcasts sail aboard the stolen German U-boat, the Venture, in search of adventure, treasure and a home. Everyone aboard has a past they are running away from, some with adversaries trying to catch up. The crew is hired to rescue a British intelligence operative from behind enemy lines in order to bring vital intelligence home that could change the course of the looming world war.

This is a good pulp story, particularly after you wade through the lengthy intro. The leader of this band, Captain Jack Harper (isn’t it always Jack?), comes off as a macho stone-faced type a first, but softens with a devilish sense of humor, and a penchant for the fantastical in the form of his search for a legendary lost treasure. There’s a lot of potential for more adventures with this crew if you can get past one glaring detail.

The artwork is flat, colored in matte solid colors with facial expressions that look like they could have been programmed into a computer. Think flash animation. It’s clear from the sketchbook section of this volume that the artist is capable of much more realistic and compelling detail. Whether this was a decision on the part of the colorer to give it a more nostalgic, almost poster-like look, or whether it was the main artist themselves the effect is to make the book look more childish than it is. Sure it’s a pulp action story, but this kind of work should have been reserved for the covers or maybe a couple of stills. Some scenery shots, like the one shown here on the cover, have more depth of field and even some compelling detail, but on the whole this looks unprofessional.

Still, I’d be willing to hire the Venture for another voyage if nothing else for an Indiana Jones like ride under the seas. 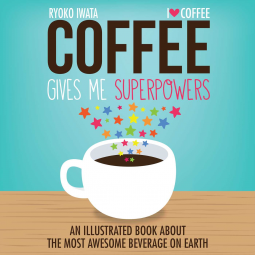 This book is largely a series of info-graphics about everybody’s favorite , , obsession, coffee. I was surprised to learn that engineers do not drink the most coffee, though a lot of scientific professionals and writers do. I have definitely applied the principles of when to drink beer and when to drink coffee, and I’m pleased to know that the bumble bee enjoys the “buzz” from coffee as much as I do (their pun not mine).

This would make a better coffee table book than an ebook. You could probably devour this in one coffee break, especially if you’re sipping a Venti. Some graphics are just cleverly displayed stats, but I actually appreciated the graphic showing the differences between a cappuccino, a latte, etc. I don’t tend to drink these things (tried a flat white a little while ago and it just struck me as frothy, expensive coffee that tasted more bitter than black. But I might try variants of the red-eye (shot of espresso in your coffee). I wonder if I can coin the term purple eye to mean four shots?

Also McDonald’s coffee is apparently the weakest in terms of caffeine content. And if you ever watched the episode of Futurama where Fry tries to drink 100 cups of coffee, you might want to know he’d probably die of caffeine poisoning about 20 shy of his goal. 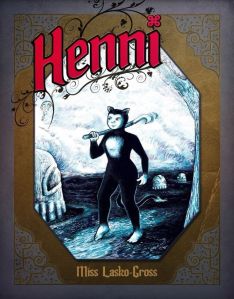 Henni is a coming-of-age story about a girl who questions the wisdom of a society that teaches that she should not learn, that her husband should be chosen for her by bribing a priest, and that she would die if she went outside the confines of her village. Her father went missing many years ago and soon Henni discovers that her father made it outside and that the world is far larger and stranger than she might have imagined. But that doesn’t mean it is necessarily better, at least not in all corners.

I liked this, and think it would be a great story for someone to read at about age 8-10. It’s enchantingly illustrated mostly in black and white with blue tones (as you can see from the cover). The dialogue is simple and straightforward but not childish, though it does occasionally descend into childish humor.

I particularly enjoyed the sequence where Henni is being trained in the ways of the new world and how their creation myth stacks up with what she’s been taught. Her own interpretation of the story may be closer to the mark than the people in this new city would want to admit.

The story ends a bit abruptly. Part of me wanted to find some more sign of her father, or to find a place that she could be accepted, but we are led to conclude this is eventually what happened. It may be that I just was hoping we could spend a little more time in this world. 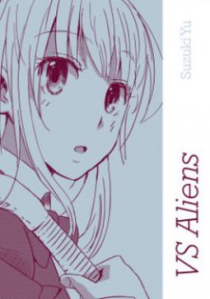 Kitaro is confronted by his classmate Aya with a startling claim, their fellow classmate Sana is an alien. To make matters more complicated Sana believes she may be an alien and that someone is out to capture her, or take her back to her home planet. Is Sana really an alien, or is there something more dark and sinister behind all of this?

This is one of the more engaging stories I’ve read from Gen Manga. The first couple of chapters of this story are in the Gen Samplers available on Amazon, but with the Kindle edition selling currently for $2.99 you really can’t go wrong with just buying this one. Most Manga volumes are at least $5.99 which is still cheaper than most American graphic novels.

The one thing I like about teen comedies from Japan, is that they tend to come without a lot of the angst that shows up in American stories. Sure there’s a little bit of hurt feelings or awkwardness in sharing a jacket, but the majority of the story is focused on fun and intrigue. The final reveal is equal parts entertaining as it is implausible. Ah, the lengths we’ll go for true love.

The art style is similar to other titles of this type, like Love Hina (you know I never did actually get to their wedding at the end of that., but I’m not sure I want to start back over from volume 1 just to remember what I read five years ago). In this case this volume is a “one and done”, like most of the Gen Manga volumes I’ve read, so it’s a great way to read a fun story without a whole lot of commitment.

Yeah, the little red haired girl is home early. I think we can call a double post pretty good!