For today’s reviews we’ve got some great indie manga (and a manga inspired web-comic). The material here runs the gamut from manga short stories about the nature of life, to a fantasy involving a girl who fell from the sky (or what’d be like to be the wife of a God). Oh, and talking fishes.

The people in Alive often aren’t living, at least not well. From a girl who puts on a pair of glasses that hides everything she hates in the world, only to find that she can’t see anymore, to the woman who feels and is, trapped. The author captures the loneliness of relationships, and sex in particular, quite well, but it’s the fantasy pieces that I think are more worth the effort.

Like a lot of short story collections there are going to be some stories that resonate with you, and others that are mostly forgettable. The two best stories are probably “The Wall” and “The Tower” (Neither of these is the official title, some have them, some don’t but you’ll know the ones I’m talking about).

The first (The Wall) involves a young boy’s quest to climb an insurmountable wall around the world. No one who has ever climbed the wall has come back or lived to tell the tale, including the young boy’s father. This is a simple fable about how the pursuit of a dream can change our perceptions of the world, and how what we think is the end of the journey is often the beginning.

The second notable story is The Tower. A young man who isn’t doing too well at school or at life in general encounters a girl living at the top of their apartment building on a small roof barely the size of my home office. For a few magical days they live above the world in a virtual paradise before the limits of their home finally force them back to Earth. This story might suffer a bit from the fantasy pixie dream girl syndrome, but it’s made up for in its frank depiction of teenage emotions and how sometimes it can seem like such a great fantasy to give up the world.

The art varies. Because of the inconsistent titling and some stories having ambiguous or abrupt endings, it can be a little difficult to tell who is who or if we’ve switched stories. This is more a problem in the early part of the book (once you get used to the author’s beats you can usually pick up the changes). There’s definitely some experimentation with technique ranging from the mundane, an entire story from one perspective at a bar, to more fantastical pieces.

This is not really a very happy book, but there are a few pieces to make you smile, and maybe even a few you can relate to. Fair warning, there is a decent amount of nudity in the middle of this book, and some sexual behaviors you might be uncomfortable with.

(3 Stars | Uneven, but a couple of great stories)

A young tropical fish expert gets drawn into the mysterious Cafe Renard which sells protective stones that can ward off evil spirits. And they have a couple of fish who have started to talk to him in his dreams. Are they just fish or are they gods who can control the rain and have control over the most powerful of old stones?

This is a pretty straightforward supernatural fantasy story with some amusing elements thrown in when communicating with the fish, and exploring the owner and his sister’s past. As a one off this story leaves a little lacking in terms of development, but as the first volume in what is hopefully a longer series, it is a great kicking off point.

Probably my favorite parts are the analogues between how the man takes care of the fish and their offspring, while at the same time communicating to them in his dreams. And we do have your typical “some things are best left undisturbed” and “you may be a chosen one” kind of tropes here, but that’s kind of to be expected.

The exact nature of the owner and why he’s chosen to ply his trade on a small scale is interesting, and we get a hint of a larger and darker past about which we might learn more in the future.

A good start to a story that could have some legs if the author wants to keep going.

Give to the Heart – Volume 1 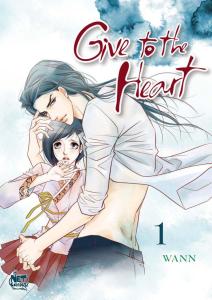 In a devastated future world there are three demons who live as God among men, controlling the essential elements of life. The most powerful of these is the water king, who can save or drown a nation with little effort. We meet a young woman, Sooyi, who is running from the water king and trying to find a way into the dead city to find an artifact to finally kill the man who destroyed her world, the man who she once loved and who jealously wants to keep her as his wife.

Most of this first volume is focused on the relationship between Sooyi and The Water King. There’s a real thread of dominance here that can go from strong and maybe charming, to downright creepy after a while. While the King restrains himself from just taking Sooyi, it’s clear that he considers it an option. And Sooyi’s ultimate method of escape from the fortress in which he holds her is not without physical or emotional consequences.

Maybe I just take this stuff too seriously. Maybe to someone else this stuff is romantic, but to me he definitely seems like the kind of guy who we’ll be glad if Sooyi ever finds a way to kill him. There’s definitely a focus on effeminate male strength (again possibly a bearded man’s bias). Still a better love story than Twilight, but maybe not by much. Personally I hope Sooyi finds that artifact seeker geeky fellow from the beginning and they have a go at the Dead City. Guess we’ll see in Volume 2. 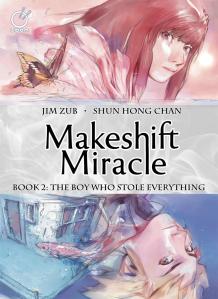 If you’re worried about missing out on Book One, or about the slightly steep price-tag for a little over 100 page book, then you’re in luck, since the entire Makeshift Miracle story is available as a webcomic. Actually this version of Makeshift Miracle is a retelling of a web-comic Zub created in the early 2000’s with different artwork.

In the first volume Colby is a teenager who feels disconnected from life and is wandering outside the city when a girl named Iris falls from the sky. They get caught out in a storm, and somehow she is able to teleport them back to his house just by thinking of it. Then there’s a mysterious tree that crops up in the living room, Colby falls into a magical world, and Iris fades away.

In the second half Colby reconnects with Iris in the dream realm, running through the discarded pieces of dreams to try to protect Iris from those who are hunting her down. But the dream world exacts a terrible price on those who ask something of it, and the creatures that serve this world are not all as they appear.

There are so many pages of this that would make great posters for your room, or wallpapers for your computer. The artwork is amazing and evocative. Of particular note are the sky-ships over the desert, the final couple of pages parallels to the first volume, the last page, and the use of grays in lonely moments when color is only around the character. There’s a decent amount of humor, and the ending will definitely surprise you, so I don’t want to give too much away.

The price is a little steep for half the story (I think you could collect the whole run in a single volume for maybe $25 at the most), but having seen the first book out in the wild this is a high quality printing. If you’re not sure, read it online.

One response to “Morning Manga Madness”