Ghosts, heroes, the end of the world. Comics let us explore all of these ideas with just a few pen-strokes. In today’s post we have a hero born in death, a world on the brink of being engulfed by the sun, and a kid just trying to heal the hole in his heart.

Cosmos is a man feared as “the universe killer”. His birth destroyed Earth and countless other worlds. Though he could not control the circumstances of his birth, Cosmos lives to try to save as many lives as he can, even though everywhere he is feared and has no one to talk to. A fighter commander who is sent to kill him instead is falling in love with him, but can she be trusted? And can they both stop a king intent on destroying everything in his path?

I like the concept, and little details like how small Cosmos’ voice is when he first speaks, a calm voice in a being so powerful. There are some spectacular feats accomplished, including absorbing the energy of a sun going nova and re-directing the energy of a volcano.

Gogtzilas’ style is rough and scratchy. It lends the page a more sketchbook like quality than a finished product. Toothy grins extend long beyond the borders of their faces, and everything is drably colored. Despite the cosmic and other-worldly tale, there seems to be a gray haze over everything. Some of the character designs are quite imaginative, and evoke more of a space fable or pulp adventure than a serious story.

Your typical all powerful being has to have some kind of flaw, or they’re not very interesting (re: Superman). Cosmos’ weakness is guilt, and an inability to connect with people due to the massive scale of his power, and the fear of his reputation. This is explored well at first, in the places he finds solitude and in the worlds he tries to save, but in the end comes down to a fight between one big bad, and the good guy. Redemption through force against an opponent he doesn’t have to hold back against isn’t much of a revelation.

Overall, this isn’t bad, but the art style will probably be a turn off to some of you.

(3 stars | Good as a limited series, and could have gone longer if it took some different directions)

The human race is at an end, the Earth about to be swallowed up by the sun, making the surface a toxic airless wasteland. We have never gone to the stars, our closest step sending a few probes we’ve long forgotten about. All the human race can do is sit at the bottom of the ocean and wait for time to run out. And do a lot of drugs and have a lot of sex while we wait.

A mother loses her husband and her two daughters to pirates, the daughters stolen and the husband slain for a battle suit and a legacy of hatred. Years pass and there is a faint hope that a probe has found a habitable planet, but the probe and its data are trapped on the barren and lifeless surface, and the only help the mother can find to get it, is a son who has succumbed to the same fatalism as the rest of the human race.

Remender’s good at pulpy action, and like Black Science you can never count on exactly who is going to survive. Tocchini’s visuals can be a treat, vast underwater cities and wildlife. But this is definitely a “mature” title. I think the idea that the human race will remain stuck on Earth even millions or billions of years later seems a bit of a stretch. In addition to overuse of the c-word, Remender likes to work his title into the plot in every chapter, talking about how low people have fallen, or how low a certain action is. It’s a little corny.

The final two issues are quite good and set up the next arc well. While not as good as Black Science, this is still worth a look if you can get past some of the content.

(4 stars | Seriously, read this at home) 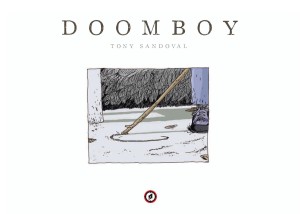 D is a depressed teen coping with the recent death of his girlfriend Annie by playing lonely sessions on the beach, and by beating people up with his guitar. His grief has caused a literal hole in his chest, which he tries to cope with by playing his feelings into the sky, and also on an obscure radio frequency that makes him a local unknown legend, even among the people who hate him.

It’s a tightly focused piece, taking place largely over the course of a summer and the Doomboy sessions. Most characters either have very tiny eyes and big foreheads, or there eyes are completely covered by their hair. The mouths are large when open and small when closed.

I found the asides and remembrances a little distracting, but I loved the sequences that visualized the music as giant squids or clouds climbing across the sky. There are some little details, like the purchasing of a star or Annie drawing eyes on D’s guitar that add to the fantasy and mystery elements, while at the same time staying grounded in understandable pain and loss. The final sequence is a bit confused but overall it’s a nice tale of using musing to cope with grief and connect with people, and how we can be inspired by even the bad things that happen in our lives.

There are some sketches at the back for the original short inspiration for the story which provide some interesting background. Not quite up to the prestige price it is being offered at, but good to pick up or maybe check out from your library.

(3 stars | An imperfect piece, but worth a read)

A girl, Rori, daughter of a Japanese seamstress and an Irish engineer comes to Japan after a falling out with her father to live with her mother. Her mother’s job keeps her out weird hours, and so Rori is given plenty of time to explore Japan, including some dark corners where she’s attacked by turtle men, and saved by a girl who seems to have some special relationship to cats. Soon she begins to see her own powers to see the strings of the world around her, and other people with power are drawn to her, for good and evil.

As much as this is a fantasy story set in Japan, it also seems very rooted in the real Japan, and not the land of oriental mystery that’s in a lot of these stories. The difficulty of being a girl with red hair in a Japanese school, the urban life of the working class in Japan are just a couple of examples of this authenticity at work.

Zub draws on a lot of legends and creatures known as Yokai, while creating his own legends. At the back he explains all of the various creatures and their origins in Japanese mysticism. There’s a lot of humor and the tone is a little lighter than the rest of the pieces in this post. Cummings art is very grounded in real architecture, while still allowing for the presence of evil creatures and magical girls. Like a lot of first volumes, this will leave you hungry for more, and in some way the story is just getting started, but I trust Zub to take us the rest of the way.

I was looking forward to this for a while and was not disappointed when I found it on NetGalley.