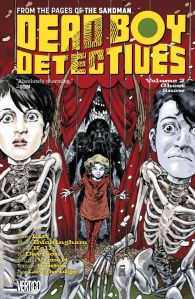 Edwin and Charles might be dead, but that doesn’t stop them from being great detectives. Branching out from Sandman Volume 4, the Dead Boy Detectives solve the mysteries of their past and the supernatural netherworld of the Netherlands.

In Volume 2, Crystal Palace convinces Charles to seek out his half-sister Clementine, a monk living in a windmill with her scientifically oriented daughter Miranda. Charles learns that his father may have murdered his mother, a ballerina who fell to her death from the stage lights above the theater where she danced. As they pursue the truth they also learn of the danger to their friend Rosa, who is trapped in a coma dying but also trapped in a world between life and death, tormented by a creature named Nye and the “poppets” he creates out of the elements of the world. Charles must journey back to the boarding school where he was killed to save Rosa and to finally uncover the mystery behind his parents.

Though I didn’t understand a lot of what was going on with Rosa, Hana and the Netherlands (something presumably explained in Volume 1), I found Charles’ story touching. There’s a good deal of humor throughout, from Miranda who is skeptical of the boy’s existence, to the two ghost cats, and also in Buckingham’s fanciful but relate-able illustration. The budding romance between Charles and Crystal is charming and sympathetic.

I particularly liked the ties to the Sandman universe, with Edwin being terrified when someone dies nearby for fear the personification of Death will find him and force him to pass on. The side-tale involving ghosts connecting to an MMORPG and Edwin and Charles’ old schoolmaster being pulled in from a summoning is pretty funny as well, though the lines are less detailed than in the Ghost Snow storyline.

I definitely want to pick up volume 1 after reading this, and hope for more adventures with these two.

(4 stars | A little confusing if this is your jumping on point, but still a compelling family-driven story)