More Technology From The Future: Star Trek and the PADD

Star Trek has always been a decent predictor of technology, from flip phone communicators to turbolift doors, and even hyposprays. But probably the most prescient device was the PADD (Personal Access Display Device). 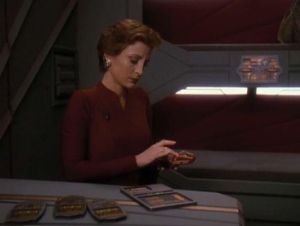 Not only did the PADD predict hand-held data entry and reading devices like the iPad and Kindle, it’s also one of the early cloud based devices. The PADD had the ability to tie into the main computer and download data on a particular book, technical document, image, or tech specification. They were even used for gaming, as Jake Sisko had quite an addictive Dom-jot habit (ah the perils of distraction even for the 24th century writer).

The devices were limited and special use. It seems like there ones for every shape and size task, and that they were handed between officers like paperwork in the mid twentieth-century. Most people say that we can get by on only a single device, yet even those of us who have tablets probably also have smart phones.

I have four of these “PADD’s” knocking around in my bag, and while they may have more functionality and storage, they’re just as specialized. One device can read my books to me and play limited games (and doesn’t get glare in the sun). Another is my primary library device, containing over 2000 books. My Kindle Fire is primarily a comic book reading device, and my other Android tablet is my auxiliary comic book and visual reference tablet (currently being used to look through 1000’s of RPG Maker image files). I suspect I’m not alone in this. 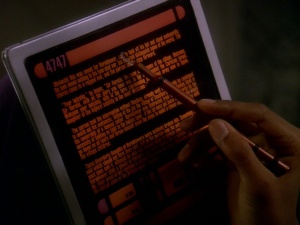 Our modern PADD’s come in all shapes and sizes, from full sized iPads to tiny smart phones, and we often do use a stylus to write (probably the only way I’ll be able to text on a smart-phone with my meat fingers).

Libraries today are already experimenting with the idea of having Kindles and iPads available for checkout, and Jeff Bezos has at times tried to make the Kindle as cheap as possible so that everyone has easy access to reading. In Bezos’ case part of the aim is to get people into the Amazon infrastructure, but still the idea of everyone having one of these devices, or even being able to just hand them out freely is enticing. I’ll always be a bit possessive with my gadgets, but the barriers to entry for tech like this are getting fewer.

And the specialized PADD’s in Star Trek do suggest an interesting idea for the future of book reading. eReaders have often been perceived as a threat to physical books, but there are ways to transform the digital tablet into a similar device, whether if it’s displaying the cover of the book you’re reading on the back, or by making a one off cheap tablet with navigation for a single book. I’ve always been more of a fan of general rather than single use products, but I think there is a happy medium to be found here.

Do you have multiple tablets, or you try to keep it to just one? What about the cloud? Do you like to read books on the device, or connect to the internet to read?