The Old Ways are the Best Ways

I just want to watch a little TV at the end of my day. Why must it be so hard? 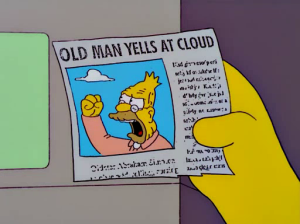 See if any of these stories sound familiar:

I love the convenience of being able to pick any episode of Star Trek and watch it without having to pull out my DVD’s, and I’m kind of bummed the same service doesn’t exist for Babylon 5. My wife and I started watching MASH because it came on Netflix, even though I also own all the episodes on DVD. And I’m glad I still have those disks because there have been several nights where I’ve had to use them instead when Netflix was being a butt.

I have yet to find a dedicated streaming device that is the equal of even a rudimentary laptop. And none of them compare to actually having the physical media. For all our cord cutting, we still aren’t getting the same reliability we used to get for free over the air, or for an exorbitant fee over the wire, or for a mid fee for a spinning disc. Don’t get me wrong, whenever I go back to over the air I’m shocked by the quality dip. But at least I can watch. I like solving computer problems for fun, but not network issues. That kind of stuff just needs to work, or I get cranky.

3 responses to “The Old Ways are the Best Ways”