Diana Dane is an unemployed investigative reporter tasked by the mysterious information broker Darius Dax to uncover the mystery behind a golden arch that fell on the town of Littlehaven. What is the meaning of the word “Supreme” emblazoned on the arch, and who is Ethan Crane? And should Diana Dane trust Dax or the warnings she hears in her dreams?

This is a reboot of a reboot of a rebooted super-hero series. Yes, superhero. A little Wikipedia research reveals Supreme (a la Ethan Crane) to be a Superman analog first created by Rob Lefield and rebooted by Alan Moore. Diana Dane = Lois Lane, Darius Dax = Lex Luthor, etc. Moore introduced a meta element to the comic involving “revisions” that reset reality, in part to account for the different styles and approaches of the writers working on the title. There are many versions of Supreme, Dax, and Diana Dane. Some memories seep through to the current version, and some retired versions are taken to the Supremacy outside time.

Ellis maintains this conceit, revising the world into a much less heroic version (possibly a side-effect of Erik Larsen’s despised run of the comic). The latest revision has destabilized the boundaries between reality and powers from the distant future are trying to repair the damage either by triggering another revision, or removing key people into the safe future. The plot is largely disconnected and highly stylized, interspersed with scenes from a television show called Professor Night that somehow is connected to the revisions.

I’m okay with having to work to make sense of what’s going on. As a fan of Finder, I’m used to not all information being provided to me at once (though Carla does make use of extensive footnotes that do clear a lot up). You can do a stylized story as long as it crystallizes into something magical at the end. What we get from Ellis is a data-dump explanation and an abrupt unsatisfying and inconclusive ending.

Tula Lotay’s artwork is the highlight of the book, giving an ethereal sense to both reality and dreams. She draws a lot of ribbons and shapes interspersed with the story, like an old photograph with scratches or blurs. It’s really unique and gorgeous to look at. It reminds me a lot of the best parts of Fatale.

Ultimately this story fails to engage new readers to be part of the Supreme mythos. In a world where we can keep hitting the reset button, why should we care about these particular versions of the characters? But it’s Ellis’ execution that fails to captivate most, evoking a sense of the mysterious but lacking any real mystery.

Sidebar: My Wikipedia research did uncover a villain by the name of Televillain who apparently can enter the reality of television shows. He kills Monica Gellar in “The One Where Monica Gets Shot” and then is accosted in real life. Now that would be an interesting comic to read (Images from ComicVine). 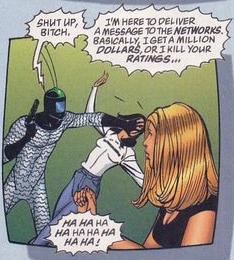