So here it is, the cover for Surreality:

That’s our friend Jessica serving as our cover model. We did the cover shoot about a month ago in four different locations: Goodale Park, the Scioto Mile (the location that made the cover), in front of City Hall and in the Short North. It was a pretty overcast day, but thankfully the rain you see in the picture is an after effect.

My wife took most of the photos with either her cell phone camera and a couple with the nicer camera. I took a few test shots for angles and recording the process for posterity. It took about 400 shots to get the one we liked over the course of about three hours (we had to get home for the OSU football game after all). Jessica was a real trooper, standing through costume changes, and slight adjustments in pose as my wife tried to get just the right shot.

What’s funny about the whole process is what you like in person doesn’t always match what looks good when you try to play with it. We were working with two wigs, two fedoras, two dresses (though we only shot with one) and two trenchcoats (thanks to Jessica’s Mom for the coats). The black coat was a little shorter (about the length of the dress you see in the cover) and looked good in a lot of the shots but ultimately the longer coat just fit the mood better.

The dress and shoes came from Rag O’Rama, an upscale thrift store on High Street (they don’t just take anything like Goodwill), and we had to look through probably two-thirds of the dresses to find the ones we wanted, even though as you can see, we don’t actually see much of it in the shot. The book is set in modern times but we’re going for a noir 1920’s-30’s sensibility of what is “sexy”. Think Katherine Hepburn or Mary Astor.

We got a “goddess” wig from O’Rama as well, which turned out to be kind of difficult to work with. It had a lot of curls that we tried to tie up or style. Ultimately the wig you see we picked up at Party City the night before (about 15 minutes before close).

Most of the effects work was done in Pixlr by my wife. She really did a wonderful job capturing the mood of the real and virtual world of Surreality. The final composition work was done in Photoshop after only about eight different tries (some of them really bad, like seriously … what was I thinking?).

Of course I sent a copy of the cover to my copy-editor, Brian, who responded with this suggestion: 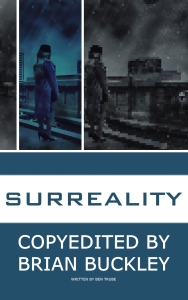 At least my name is on there somewhere.

What are friends for?

One response to “Surreality – The Cover Shoot”