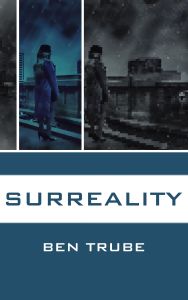 As many of you know, last week Surreality was not selected for publication on Kindle Scout.

First off, I want to thank everyone who nominated the book, shared the campaign on social media, and just expressed your overall support. I got some very nice notes on Twitter and e-mail commiserating with me after the campaign ended. Overall I feel good for having run the campaign, and am excited to continue down the publication path for Surreality as originally planned. I’ll write a more detailed retrospective on Kindle Scout in the coming months.

So, the big question: When will Surreality be released and where?

Short answer: 1-2 weeks and just about everywhere. Pre-orders may become available sooner than that, so stay tuned.

I’m working on putting together eBook versions for Amazon, BN, and other channels through Smashwords. (Yes, John, that means you’ll be able to buy a copy through the iBookstore). Smashwords in particular is very exciting as buying from there gives you the book in all of the myriad formats, meaning you really own it.

For those of you looking to do your Christmas shopping, I’m also releasing a print edition through CreateSpace. I intend to enroll the book in MatchBook as well (meaning you can get a cheap eBook version if you buy the physical book).

Anyone who voted for Surreality on Kindle Scout will get a notification that the Amazon version has been released. All of the other editions should launch at the same time, so if you prefer to buy for the Nook, the iPad, the Kobo or the hootinannie, you’ll find the links on the blog (and probably all over Twitter and Facebook as well).

I’m really excited to finally be getting this book out to you (just in time for cozy winter nights, and actually a little faster than if it had been selected).