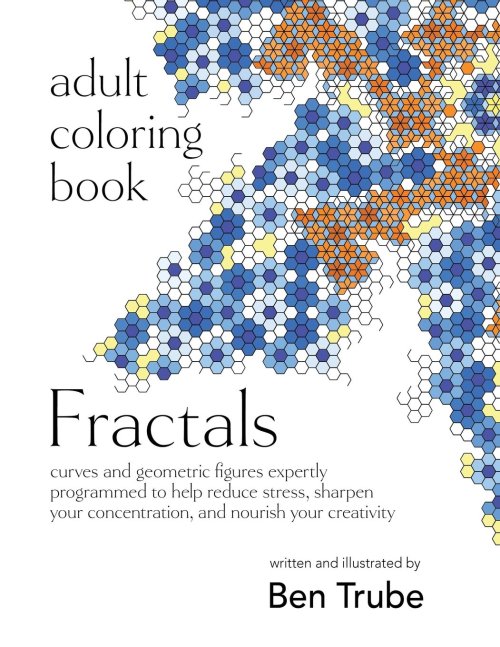 A lot of the projects I take on are just natural extensions of the things I immerse myself in (i.e obsess about). Even before being contacted by a publisher I’d been considering a fractal coloring book project for a little while. I had a lot of the programs I’d need, and 1000’s of images I’d generated in producing my previous two fractal books and subsequent posts. All I  would need to do is select the best of them, maybe write a good intro, and I’d have a quality book.

I think the only way we take on big projects is by deluding ourselves into thinking they’re not big projects, then plowing forward full steam ahead.

For a start, fractals that are good to color have a very different set of criterion from most of the fractals I’d been creating up to this point. You want something intricate but not so detailed that you can’t color it. You want some kind of pattern, but nothing too regular. You want something very open to interpretation, but with some common points of reference to give you guidance. You want a good variety of images, while providing people enough of what they’ll like. You need to cater to different difficulty levels, and because I like to teach about fractals as well, you need to use different generation techniques.

That’s a lot to think about when you’re trying to make 25 images.

Creating fractals for this book fell into one of a few different modes. There were a few, including the dragon curve and the Apollonian Recursive Gasket (see below), that were “classic” fractal designs that I felt just had to be in a book like this (though for the life of me I couldn’t get a Mandelbrot Set image I was happy with, maybe next book). In the case of the gasket, my insistence on including it might have had a little to do with spending 8 hours trying to write the code that would correctly generate the image (including learning a new way to think about circles, more on that some other time).

Other designs were created by looking at things around me, a pattern on a quilt, a set of kitchen shelves, and playing around with some L-Systems interpretations of those objects until I got something I liked. Or other times I would draw out a small axiom on paper, sketch out a potential replacement rule, and just see what happened.

The third method involved perusing the thousands of Julia and L-System pictures I’d previously generated for my two fractal books and for posts on this site (this is where my new $50 kindle came in handy). The Julia images in particular took a lot of work, as the generation time to get an image with a good drawing edge is pretty long (2-8 hours on my quad-core laptop). L-Systems by comparison usually take at most only a few minutes, meaning you can experiment a lot more with tiny changes to see what the new result might be. This is probably why 19-20 of the images in the final text are variations on L-Systems and Turtle graphics.

Overall I produced well over a hundred images, culled from potential lists in the 1000’s. By comparison the selection process from those 100 was pretty simple: print the image out, run it by my wife to see if it’s a good candidate, and try not to make too many agonized screams when an image that took many hours to generate is rejected. Actually, my wife had a lot of good suggestions for potential ideas, or questions about tweaks I could do to make an image better.

The initial arrangement of the final images was done on my basement office floor, with one of us playing goalie to keep the dogs from walking all over the paper. Some things are just easier when you can see them out in front of you. We marked each image with a crayon indicating the rough level of difficulty, and moved sheets around until we got an arrangement we liked.

And this was all before I’d written a word.

Just to be clear, this was all great fun for me. I’ve seen other examples of coloring books where people slap together a bunch of stock images, or throw a bunch of their own previous work in without a lot of thought as to whether it would be fun to color. I didn’t want to make a book like that. I always like to create something new. Sure, there were times when I’d create 15 images and only get one good one, but that’s pretty much the experience with every creative endeavor. And there were plenty of “rejected” images that I had a new idea about, and made something even better.

This applies to just about any kind of writing. Writing something you later cut is never wasted effort. Everything is part of the process of making the final product, and even the things you look at and go “what was I thinking” had a part in shaping the final whole. And into making you a better writer or artist.

My new book, Adult Coloring Book: Fractals is available now on Amazon. Published by Green Frog Publishing. You can see some of the fractals from the book, and color art by my wife (“the little red-haired girl”) on my new website bentrubefractals.com.