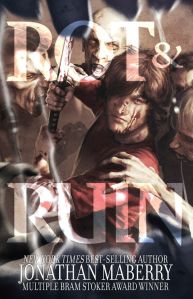 Continuing the adventures of the apparently popular book series, Rot & Ruin: Warrior Smart finds a band of teenagers wandering the zombie infested countryside searching for a jet they may have seen (and that never comes up again) only to soon find themselves trapped on a farm with crazy breeders.

Let me back up a bit.

What looks interesting and cool about this series is the kid with the sword. We get the idea that this is going to be kind of a wandering samurai kind of book set in a zombie apocalypse (zombies here are called “rotters”). The other teenagers have some “backstory” to explain the various types: the city kid, the feral jungle girl, the crazy redhead, and the aforementioned sword wielding kid dealing with the loss of his brother.

This whole volume feels like it could have been an episode of The Walking Dead, and not in a good way. It is humorless, and adds little to the zombie canon (we still have to make ourselves smell bad and move slow to trick the zombies). I did like the idea of labyrinths and written instructions as a way to weed out zombies, and the idea that zombies only really move when there are brains to eat, but I suspect these aren’t really new ideas, just things I hadn’t encountered before.

But my biggest complaint is how much the story telegraphs a “shocking” plot-point, and then spends the rest of the volume dwelling on that point.

Our (heroes?) are saved by a pregnant young girl and are taken to a farm with a lot of strapping young men, no women in sight except for some in their 50’s, and very little visible animal life, including the mysterious “cows.” If you’ve been reading this genre for more than 10 minutes you know that the “cows” (*Spoiler alert I guess*) are going to be the pregnant young women, all locked in a barn, and sure enough we readers find this out maybe 10 pages later. Our main characters don’t realize it until a full chapter later, to the point that I thought the big reveal was going to be some other even more horrible thing these farmers were doing (not to say that the cow thing isn’t horrible, because it is).

What I object to most about the “cows” is that it is only in this story for shock value. There are a lot of interesting motivations to explore here, maybe even some parallels to human trafficking, but the writer treats the women like the cattle the farmers believe them to be. We get no personal narratives, no women making this choice for themselves, they’re just brainwashed and don’t want to leave. This isn’t what we thought this story would be about. Weren’t we going after some jet or something?

There are long drawn out and implausible fights. People fight, get captured, ramble a bit, escape, fight, get captured, and finally escape again. And the conclusion is that kids aren’t monsters I guess because they chose not to kill one guy, even though they killed many other people in trying to escape, and pretty much left the farm at the mercy of the rotters.

You know what would be cool? Take the classic manga Rurouni Kenshin, steeped in Meiji era politics, and just add zombies. That would be the zombie samurai epic we deserve. That would add a whole new dimension to the whole “I’m not going to kill anybody” arc of Kenshin. Would Kenshin kill Zombies? Nobuhiro Watsuki, I’m looking at you.

(2 Stars | Even for zombie faire this was terrible)