Ratio on cover is exact opposite of how much the story revolves around these groups of characters (thankfully so).

Starfleet Academy is a pitch-perfect addition to the Abrams (Kelvin *ugh*) -verse, much in the same way an earlier Marvel series (of the same name) added to the DS9-verse. The five issue story takes place in 2258 and 2261, following the adventures of the main Trek crew just prior to the events of the 2009 movie, and a group of new recruits competing in the Academy’s centennial celebration contest. The two stories are told roughly concurrently, though more weight is given to the 2261 era crew, and the comic is better for it.

The 2258 arc centers mainly on Uhura, with cameos by Spock, Kirk, Chekov and Robocop from Into Darkness (Admiral Marcus I want to say…?). Uhura and Spock’s relationship is a bit bumpy (all Spock’s fault BTW) and Uhura decides to turn her feelings toward investigating a faint signal she picked up from a lost ship, which turns out to have been lost more than 100 years ago. After she discovers that information about the ship and transmission is classified she enlists the help of first Chekov and then Pine-Kirk to break into the Starfleet Archives for more information. She’s caught, chewed out, and Spock saves the day (and their relationship), but we don’t really know what happened to the lost ship.

The problem with comics about the main crew (especially prequels) is we know where they will end up. The stakes are lower. This was one of the reasons the original Marvel Starfleet Academy was so groundbreaking. Aside from Nog, all of these characters were original to the comic and anything could happen to them (including being killed off in the 5th issue)… 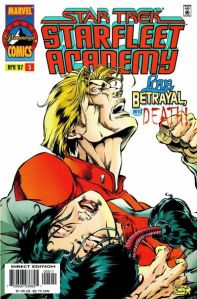 And this is before the Knightfall-esque cover where a cadet’s back is broken by a Jem Hadar.

The 2261 story centers around T’Laan, a Vulcan cadet struggling with whether to remain in the Academy, or rejoin the rest of her people in establishing a new Vulcan colony. She’s convinced to stay through the Academy’s 100 year celebration competition by the most adorable Tellarite instructor in the history of the series in return for him expediting her withdrawal from the Academy should she still decide to leave after the contest.

Isn’t he the cutest thing?

Lets take a minute to admire Derek Charm’s artwork which is dare I say … Charm-ing.

For those of you still left after the horrendous pun, Derek Charm does manage to inject a lighter tone to this story without taking away from some of the real conflict going on with T’Laan. This a brighter and more cartoonish interpretation of these characters, but never in a way that feels like a cartoon. It’ll probably be more engaging to a younger audience, but still with a lot to offer older readers like me. The ship design work melds well with some of Beyond’s new effects we see from the trailer.

T’Laan’s teammates are the usual mix, a haughty Andorian, a girl who built her own exo-rig, a brainy human, and a Monchezkin who is only just now learning to use spoken communication.

This character is played largely for humor, sometimes more effectively than others. We’ve seen literal characters like this before (one of the reasons I love Anya from Buffy), but this plays a little differently. Overall, he’s a nice one to throw into the mix of all these misfit cadets.

The comic has a good mix of ups and downs for our little crew, playing a lot better than some of the challenges Wesley faced in his Academy testing episodes in Season 1 of TNG. It ties the two storylines together in the final issue quite well and leaves things open for us to spend more time with these characters again.

My only quibble is I don’t think we really needed the main crew storyline. All of the discovery and risk parts of the storyline could have been taken on by T’Laan and her group, who could have been plausibly kicked out of the Academy unlike Uhura. The Spock/Uhura relationship stuff doesn’t add much to their story that we didn’t already get from the 2009 movie. And Uhura doesn’t get to solve the mystery and has to wait till this new group comes along, so it’s not particularly satisfying for her either.

But overall this is a fun tale, which is one of the best characteristics of the new movies. It integrates more serious events like the destruction of Vulcan without being morbid. Definitely a good comic to read in advance of seeing the movie. Hope there are more tales to be told with T’Laan (and the lovable Tellarite).