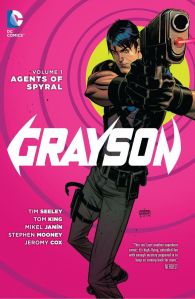 Dick Grayson was the first Robin, then struck out on his own as Nightwing. Then Nightwing’s identity was revealed and Dick was thought murdered. Staying dead to protect his family, Dick infiltrates a secret spy organization known as Spyral. Spyral’s mission is to gather the Paragon organs which grant the ability to duplicate the powers of the Justice League, and determine their secret identities. He is partnered with Helena Bertinelli, daughter of a notorious Italian crime family, and assumed identity of the heroine huntress (who in reality is the Helena Wayne from Earth 2). Grayson must fight alongside Spyral, while feeding information back to Batman, his only connection to his past life and the only one who knows he is still alive.

This collection contains Issues 1-4, the Secret Origin story and a Futures End tale (this last was not included in my eGalley). The Secret Origins tale does a good job explaining where we are in the New 52 continuity for those of us not up to date on the latest developments of the Forever Evil storyline. However, because it is mostly plot exposition, interspersed with odd sixties psychedelic trappings, this leading part of the book drags a bit.

When we get the ongoing series Issues the pace picks up, as Dick deals with what it means to be a spy and not a hero. It’s obvious that Dick is having a hard time on this mission, enjoying the ability to stretch his legs without endangering his family, but he’s not comfortable with the compromises he has to make to get the mission done.

The third and fourth chapters are probably the best, as the series learns to drop the sixties affectations in favor of playing the story straighter. Issue 3 actually manages to make a character who can only see through the barrels of his guns human and relate-able and 4 is a playful tale, as Dick encounters the girls who are in the finishing school part of Spyral, training to be the next members of Moussad and other spy organizations.

I like the design of Bertinelli’s outfit, which hearkens to her alter-ego yet another person Huntress. Her relationship with Grayson should be interesting in future issues. However, the full page spread on issue 3 involving the correct usage of “Wing-night’s” name was unnecessary. There’s no reason to try to make this book Saga, and you can’t be naughty enough to get even close anyway. The alternate covers at the back (particularly the Lego cover) were a treat.

Overall, an interesting corner of the DCU. Titles like this and Gotham Academy give us a look at super-heroes from a more human scale level. Just with twisty faces.

* I received a free ARC from DC and NetGalley in exchange for my honest review.