May the fourth be with you, and also with you 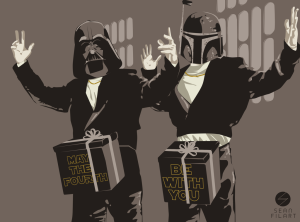 Now I am decidedly a Trekkie in the whole Trek versus Wars debate (and yes I meant to say Trekkie not Trekker which is a whole other debate). Actually I’m more of a B5’er or whatever you call people who love J. Michael Strazcinski’s 5 year epic that should have been subtitled “The Rise and Fall of Londo Molari”. But I think all of us nerds can agree we really love both. Wars and Trek appeal to different parts of our brain, and even though there have been times I’ve complained of Trek heading in more of a Wars direction (particularly with the last couple of Abrahms movies), I’m still going to watch, game and read many of the things these two properties have to offer.

Though not either properties’ animated series.

Here’s the thing though. In a way this debate feels archaic, or at least should feel archaic. I’ve heard an update of this might be Babylon 5 vs. Battlestar Galactica, but even those series have been off the air for a while (I personally found Galactica depressing and grinding after a while). I’m a brown-shirt too, but let’s face it, 14 episodes, a movie, and a few comic books are really all we’re gonna get out of that.

It’s like people who still cite the ABC’s of Science Fiction (Asimov, Bradbury and Clarke). These are all great writers (or great thinkers anyway). I wish I had the talent for imagery and crafting short stories of Bradbury, and I find myself striving for some of the same things as Asimov without trying to be too much like Clarke (the ending of my first ever completed novel was a lot like the ending of 2001 which is to say, incomprehensible and bad).

To me both Wars, Trek and the ABC’s are a solid grounding in the classics. But have we reached a point in science fiction where it might be time to start defining the genre by more than just these two titles? The Trek versus Wars thing feels more like an external classification than an internal one, and it seems maybe even a little dated despite the lasting legacy of both these series.

Now I say this as a guy who is on a bit of a mission to convince people that Deep Space Nine is better than The Next Generation, and as someone who still buys Star Trek comic books, and was thrilled for his 30th birthday to receive a Starship Enterprise sushi set. This is a nudge more than a shove.

I wish I was a little better versed in some of the great work of modern authors (besides Doctorow and Scalzi), and I’m making an effort every day to find the people who are writing this generation’s Trek or Wars. So far the place I’ve found it is in comic books, with titles like Letter 44, The Fuse, Saga, Copperhead, Roche Limit and Black Science (most of which I’ve reviewed on the blog). I guess lately I’ve been finding the idiosyncratic and personal work of comic book writers to be more appealing than larger more mass marketed properties. That said, a lot of individual authors still do great work on these series (and we haven’t even gotten to the behemoth that is Doctor Who which is again a 50+ year property).

Again, I love these old shows, movies, etc. I want my kids and my grandkids to enjoy them. I just want to make sure that when we (or the people outside) talk about science fiction, it seems like there is more to talk about. There’s something out there in science fiction for everyone to love, not just us nerds.

And maybe today of all days is a good time to have that discussion. If someone talks to you about Star Wars today, have fun with that, and maybe throw in something else you’ve read lately that really grabbed you, and that they might enjoy.