On the way to Helsinki

I’m on my way to the Bridges 2022 conference in Helsinki, Finland. It has been… *checks watch*… five years since the last time I posted to this blog. I won’t try to catch you up in a single blog post on everything that’s happened in those five years, but suffice it say, the more things change, the more they stay the same.

At the moment I am sitting in the Chicago airport next to my friend Brian, on my way to present my first paper at a math conference. You can read it here, and as you can see I’m still writing about fractals. This will be my first trip overseas, and only my 3rd country overall (though we plan to add Estonia as well after the main conference).

The paper like many things is evidence that the only way to accomplish anything is to not know how much time it is really going to take you in the first place. These 4 pages (about 1200 words) are the culmination of some initial explorations two years ago, dozens of hours programming, 10’s of hours writing, some copy-editing from the aforementioned Brian, two rounds of reviews and revisions, 20 hours building a 3D model (for one picture) by hand, and another dozen hours or so writing a presentation (which I was revising for a few more hours before leaving the house yesterday). I’m excited, nervous, but I think generally ready, and even after I just gave you that laundry list, I want to do it all over again as soon as I can.

The Bridges conference is really special. When I went there five years ago, I felt like I had met my tribe. I like working as a professional software engineer / architect, but it’s math and making art that excites me, and the opportunity to try to inspire that joy in others. The last time I went I felt like I learned more than I could take in all at once, and I’ve been itching to go back and learn even more.

I’m not sure when you’ll hear from me next. I am trying to scare together time outside my job to work on another programming book (this one in python/cython), but that could be quite a ways off. Going to the conference did at least drag me onto Instagram (https://www.instagram.com/fractal_man2147/). I’ll try to keep up with posting new artwork in-between larger projects. I may take a crack at other papers as well (maybe a longer paper for Bridges, or something for the Journal of Mathematics and the Arts). And I’ve got a pipe dream idea for a recreational mathematics magazine of my own. Maybe someday.

In the meantime, below is one of my favorite sandpiles from the work on the paper. It’s made using a quilting pattern called “Road to Oklahoma” and was color-sampled from the flowers in my garden.

Until we meet again, hopefully a little sooner next time!

I know how it is. You get to the end of November and you realize you forgot Mandelbrot’s birthday (it was Sunday). Or your friends ask you to come over for Pi day and then laugh at you when you bring pie instead (which they eat without thanking you). Well don’t worry, I’m looking out for you.

Did you know that you can make up math holidays just by choosing the right numbers? I mean, tomorrow is Fibonacci day because it’s 11/23 (it’ll really be cool in 42 years when it’s 11/23/58). I even made up my own holiday on January 26th: Koch curve day (because the approximate fractal dimension of the Koch curve is 1.26. It’s also E. H. Moore’s birthday apparently).

Feeling stressed? Why not color in some fractal bubbles or a cozy quilt? And take some time to marvel at the clean numbers and lines of the calendar template I created using a python script. There were definitely at least five tiny pixel adjustments to make sure the numbers lined up in diagonals just right.

Perfect for the math geek who also enjoys trivia and pretty colors. But even if your name isn’t Brian Buckley this calendar is a great for someone looking for something just a bit different in their date tracking this year. Available now on Amazon from the good people at Green Frog Publishing.

What I never expected

I’ve been off WordPress for a while and so it’s been a while since I checked my stats, and I was surprised to learn that I had something like a 200% increase in traffic last week, and for the best reason.

My “Fractals You Can Draw” posts have always been the most popular ones on the site. In general I think the writing life is weird like that. You never know what 20 minute or hour long effort is going to be the one that really lasts. I’ve spent hundreds of hours writing this blog, but that week I spent getting my wife to draw fractals, building a Sierpinski triangle out of marshmellows and toothpicks, and frantically trying to update by C++ skills has been one of the more lasting efforts of the last five years for me.

But the best thing is every year around the spring and fall I get new referrals from schools. WordPress does a pretty good job of letting you know where traffic is coming from, and every year I find some new class, ranging from grade school to college that references one of my fractal posts. That’s really the reason I’m doing any of this. What I’ve learned since I started blogging and especially in the last year working on the “Fractals You Can Draw” book is that I really want to teach people. I like writing fiction, but I love writing about math.

Honestly I’m as shocked as the rest of you.

Right now I’m working on Chapter 5 of the new book (or trying to, it’s been a crazy couple of weeks). I’m learning about new ways to use the Fibonacci sequence to draw fractals, and I can’t wait to share what I’ve learned. I’m so excited about this stuff I even snuck in a half an hour to write on Monday night while I was waiting for my mom to finish her grocery shopping.

If you’ve found this blog through one of your math courses I’d love to hear from you. To all the teachers who included links to my posts in their courses, thank you. And thank you for teaching people about fractals. It’s one of the best ways to build a love of math.

Down from the mountain

I was annoyed with John Oliver in late August when he said he’d be taking a month off. Watching him on Monday after work has quickly become one of the ways I can handle all of the nonsense going on in the world. And here I’ve been gone for nearly two months. Hope you guys didn’t miss me too much.

Short version of what’s been going on is this: 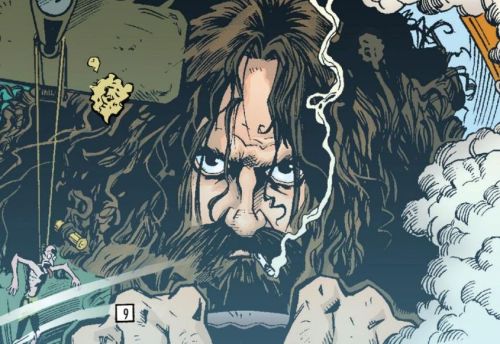 It’s this last point I want to talk about just a bit. Over at Previously.tv they’ve been doing a marathon diary of The West Wing, watching the entire series prior to election day. If you want to feel depressed about the election, I couldn’t think of a better way to do it than to watch what a fantasy American democracy looks like. My instincts are to watch or read something that bears more of a resemblance to reality, or even something far worse, so I can comfort myself in the knowledge that at least things aren’t that bad.

And so I’ve found myself immersed once again in a contemporary of The West Wing: the cyberpunk, post-human, political drama, comic book series Transmetropolitan. “Transmet” follows outlaw journalist Spider Jerusalem as he takes on corruption wherever he sees it, and pursues truth in relentless and foul-mouthed fashion. Much of the series’ narrative takes place during the administrations of two Presidents: “The Beast” and “The Smiler.” Sound familiar?

Admittedly, Transmet is as much a fantasy as The West Wing. It assumes journalism and truth can bring down Presidents. This certainly has been true, but in the fractured cable TV and social media news landscape of today it’s hard to say. But like all great science-fiction the series still has a lot to tell us about the moment in which it was written (1997-2002) and the moment in which we now live.

So I’m running a mini-marathon of my own, from now until election day. Twice a week (hopefully), I’ll be posting my thoughts on a volume of Transmetropolitan, both its place in the overall arc of the story, and what it has to say about our present moment. Already in rereading the comic I’ve seen it touch on themes of police brutality, transhumanism, racial profiling, political scandal, right-wing extremism, rampant consumerism, historical preservation, child prostitution, poverty and more.

If you want to read along I’ll post Volume 1 “Back on the Street” on Thursday (I’m using the new printing numbering, so this covers issues 1-6). Fair warning, the content is rough both in terms of subject matter and especially in the early issues, vulgarity. Also, as a dog owner I want to state clearly I do not agree with Spider Jerusalem’s attitudes/actions toward dogs. But if you can get past the rough trappings, you’ll find a gripping narrative with plenty of twists and turns, and even some genuine human feeling.

In the meantime I will try to write something that isn’t about comic books or fractals, but I’m not promising anything.