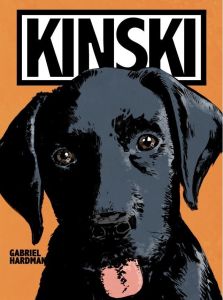 Kinski is the story of a man who ruins his life over a dog. Joe is unsatisfied with his job as a chicken feed sales rep, and needs to find meaning, which he does in the form of a black lab puppy.

Joe immediately assumes the owners must be irresponsible since the dog escaped somehow, and decides to take ownership of it for himself. When he’s forced to surrender it to the pound he tries to claim it as his own, only to find the real owners have reclaimed it. When he finds the real owners, and sees the dog happy with a kid, he decides to steal it anyway.

Maybe this an homage to the German art films Hardman is referencing, but I found this to be a meandering tale with no meaning. The puppy is just friendly by nature, and yet Joe thinks he has formed some special attachment to it, even though he has never owned a dog before, and only has an outside view of how to really care for one. He throws away his life largely on a whim and even though he seems to find some measure of happiness later, it’s only after pages and pages of one bad decision after another.

Hardman’s artwork is the saving grace of this book, and he does a good job of depicting a man going further and further off the deep end. His desert scapes and trailer park scenes are detailed and evocative. And the dog itself is cute. But that’s really all the book has going for it.

The tale moves briskly, which is just as well considering. The ending relies on two time skips of six months to give Joe some kind of a happy ending, and some plot elements happen completely “offscreen” as if Hardman was rushed to a conclusion. I guess I had the wrong impression of what this book was. I thought Joe would get embroiled in some mob dealings or something because of the dog, but frankly for most of the book, he’s the bad guy.

Want to read a book about dogs? Try Peanuts.