Every Friday I review two books from NetGalley (usually graphic novels). This week we’ve got two stories of dangerous women, some who kill for love, and others for adventure.

‘ll be upfront, I’m not a fan of David Lapham’s work, at least what I’ve read of it. He’s good at the gritty crime drama, that much is certain, but he has a little too much love of the grime for my taste. The series he’s most known for, Stray Bullets, is a crime anthology that seems to contain little of redeeming human value, despite being critically acclaimed (and Eisner winning). But I tried to come at this book fresh, looking for a different David Lapham. After all, giving writers another chance can sometimes work out. The Luna brothers might write some terrible comics like Girls, but still be able to produce interesting works like Alex + Ada.

Murder Me Dead is a noir tale through and through. A cheating husband comes home to find his wife has apparently killed herself by hanging from their ceiling fan. Her rich family blames him for her death. In the middle of this, an old friend from high-school reminds him of a girl he once loved from a simpler time. But upon reuniting with her, he finds that she is involved in a very tangled web of lies and bad people. Soon he finds himself doing just about anything for this woman, even though she probably isn’t worth it.

There’s a lot of twists and turns and betrayals to this plot. You’re not really rooting for anybody because everybody is terrible in one way or another. The best person in the story is probably the husband’s first mistress, who tries to get him to see the destructive path this other woman is leading him toward and leaves her husband not for him, but for herself. Lapham does a good job at drawing slimy characters, but doesn’t do a lot of justice to women. The man’s desire for this woman is irrational and completely ignores some pretty obvious red flags, which fits the noir world view of women. Lapham accomplishes his genre piece well, but I don’t feel like he injects a whole lot new into it other than a continuing succession of twists and turns. The ending sequence is interesting and provides a satisfying conclusion, but there’s a lot in the middle where you just want to take these characters by the shoulders and knock some sense into them.

In short, this piece feels like a throwback but doesn’t match up to the work done by the greats of that genre from that time. I guess if you’re a fan of Lapham’s you’ll be glad to see this back in print. 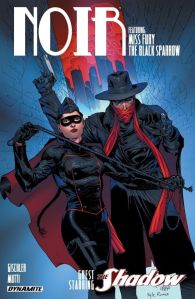 To be honest with you, aside from everyone being dressed in black, I don’t really know why this was called Noir. It’d be more accurate to just call it Pulp. Femme fatale and thief The Black Sparrow enlists The Shadow’s help in retrieving an artifact she stole from a museum. It becomes evident that the mysterious Moon stone is just one piece in a larger puzzle that may lead to a hidden knight’s Templar treasure. The Sparrow encounters and teams up with Miss Fury, another masked dark heroine who seeks adventure more than profit.

I did a little research on time line and like a lot of comic book characters there’s quite a bit of cross-pollination. The Shadow is reminiscent of The Batman who appeared a year or two later, and Miss Fury followed the debut of Catwoman wearing a costume that looks like a cross between Batman’s early ears and Catwoman’s costume.

Dialogue is a little pained at points and the writer didn’t seem to consistently decide The Sparrow was Latina until a couple of issues in. Personally, I like the domino mask depicted on the cover as opposed to the more pointed mask in the issues. It distinguishes her better from Miss Fury in terms of attitude. I was kind of expecting The Shadow to have more of a role in this story (at least coming back in the end), but his part is limited to just the first issue. There’s a couple of villains hepped on some kind of steroid drugs that do a decent job of being our Nazi stand-ins and otherwise we have kind of a female Indiana Jones story.

This got better as it went along, though the conclusion isn’t much of a surprise given the way these stories often go. Some of the back and forth between the two women is genuinely amusing, even though half the time they seem to be there just to strike sexy action poses. All in all a decent revival of a classic comic book property, and a fun story that while not particularly memorable is at least entertaining.