So what does the internet, or specifically Google know about me? Turns out quite a bit: 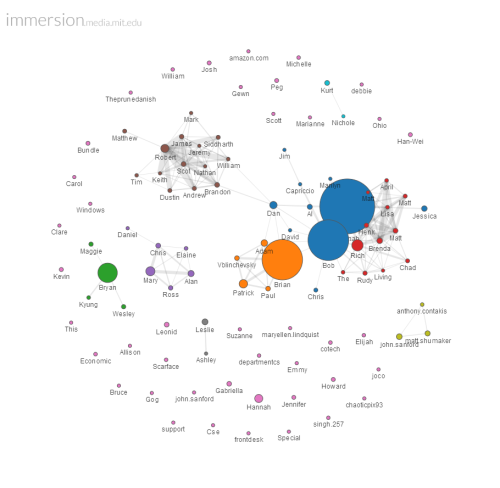 This is a representation of the last six years of my gmail account, created by the new MIT Immersion project. By analyzing my gmail’s metadata (not the content), Immersion was able to make connections between most of my groups of friends and even projects dating back years.

This is the Ohio State University Men’s Glee Club of which I was a member for five years, more specifically a list of the guys who I enlisted to sing during my proposal to the little red haired girl.

This is not a picture of that proposal.

Or how about we take a look over here:

This little pentagram is from a CSE animation class I took one of my last years at OSU. We made this:

Over here we have my bible study and a few others from Smoky Row: 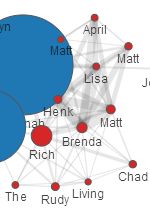 Here’s Brian D. Buckley and our mutual friends (as well as our Restore the Fourth chapter):

There are a number of other interesting data points including the two “little red haired girls” (maiden and married name e-mail accounts), a group from by brief work at the Byrd Polar Research center, as well as my old CSE adviser. There’s even a scarface (Jonathan Coulton minion, not Al Pacino gangster).

Now consider this, there’s evidence to suggest that the degree of separation between most people is closer to three (not the six from the Kevin Bacon Game). In recent revelations, John Inglis of the NSA revealed that the FISA court gave them authority to collect the cell phone information of anyone three “jumps” from a known or suspected terrorist or terrorist sympathizer. It’s likely e-mail is included in this ruling as well. Just think for a moment about combining my little network with all of the networks of everyone I’ve talked to, and everyone they’ve talked to, and everyone that group has talked to. Do you think it’s possible that someone in that last group is on a watch list? If so, then your data is probably sitting somewhere in Utah data center, among the zettabytes.

Have a good morning. And give the MIT Immersion project a go. You’ll be surprised what you can learn.

PS: Immersion seems to ignore any newsletters or blog notifications or other mass e-mail traffic that also goes through my gmail. Adding this data in would probably create a net twice as big just on my end.

Dispatches from “Restore The 4th” Cleveland

Hope you all had a lovely extended Independence Day weekend (my neighbors were shooting off fireworks late last night). But where better to spend July 4th than on the shores of Lake Erie, in a place that I’m told on good authority “rocks”, Cleveland, OH?

As many of you know I spent the day with friend and fellow blogger, Brian D. Buckley at the “Restore the 4th (amendment that is)” Rally in Edgewater Park, Cleveland, OH. 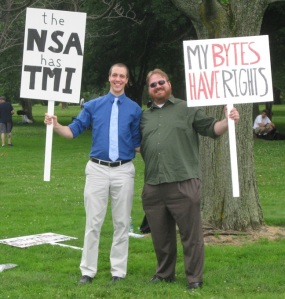 Interestingly Brian’s sign got far more questions about what “TMI” meant, than “My Bytes Have Rights”.

About 40-50 people were in attendance overall, covering a 100 yard or so stretch of road inside the park. 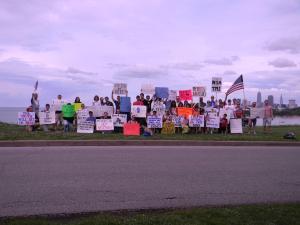 As first outings go, this rally had all the components one might expect from active political protest: 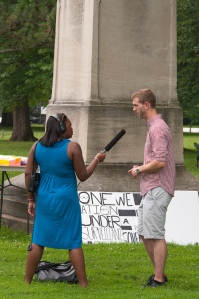 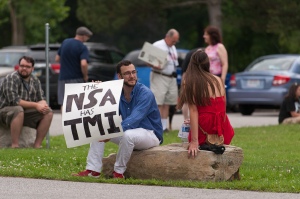 Overall everyone was exceptionally supportive and positive. Except Brian, who apparently didn’t want to be anywhere near us (that’s the lady Buckley holding the restorethefourth.net sign).

When he wasn’t inching his way down the road he was engrossed in his reading: 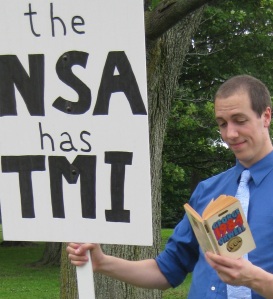 That’s Buckley for you, really knows how to show a girl a good time.

Seriously, this was a lot of fun, and a great opportunity to hang out with friends, exercise a few first amendment rights, and your upper body. It’s a bit windy by the great lakes, and a sign is basically a three foot sail (Props to the lady Buckley for the solid signage construction).

Have a great Monday!

PS. Thanks also to “the little red haired girl” who was amazingly supportive despite not feeling well and her husband deciding to go the day before.