My main character and I have at least one thing in common, we are both on a search for the perfect Reuben.

My quest began as a combination of family memories of my Grandpa Trube making Reubens and one of my favorite neighborhood restaurants going out of business. It was this little place called Pacific Eatery and it had a combination of American faire and a really good shrimp dish with brown sauce. And the owner, David, made a pretty delicious Reuben. You don’t know what you have until it’s gone.

I mean, our neighborhood already has six good pizza places, but whatever.

So far the best contenders have been this place in Indiana and a deli in Cleveland that used coleslaw instead of sauerkraut. But one of the better steps in my culinary journey came from one of my old campus haunts, The Blue Danube. 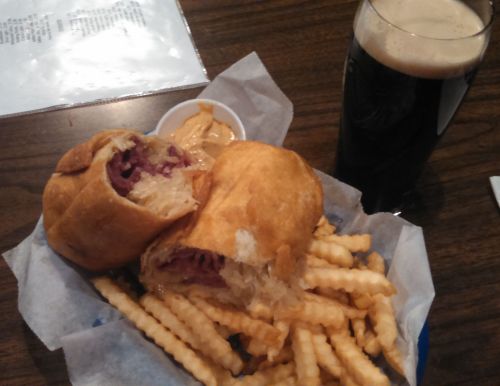 That my friends is an appetizer. That’s thousand island horseradish in the little cup. It also happens to be the sandwich my main character eats in Chapter 2.

Despite lacking one of the key components of a good Reuben (a toasted dill rye), the sandwich really holds up. It’s very hot, you basically need to eat all of the fries before it’s at a temperature you can eat without burning your mouth. The dough is flaky so it’s better to spread the horseradish on with a knife rather than actually dipping the sandwich (a lesson I’ve forgotten both times I’ve eaten it). If you wait for the sandwich to cool a bit, it will be solid enough to eat without too much of a mess, but you’ll probably still get sauerkraut juice running down your hand. But it’s not greasy, despite being fried.

The sauerkraut surrounds the corn beef, keeping it moist and flavorful. Corned beef is a tricky meat. Sliced and cooked perfectly it’s pretty good, but it’s also really easy to over cook and make tough. And ratios matter. Too much meat or too little sauerkraut and it isn’t a sandwich worth eating. But the ‘Dube gets it right.

The horseradish is mostly sweetened by the thousand island, and lacks some of the bite of pure horseradish, but it gives a slightly different tangy flavor than what you’d get on most sandwiches.

Pair this “appetizer” with a Guinness draft and you’ve got a good meal. And a backache from the ‘Dube’s terrible booths.

Most likely Keenan’s and my journey will continue throughout the series. If you live in Columbus, OH and have a suggestion I’d love to hear it. I work in Delaware too, and my character might be willing to drive for the right sandwich.

I think it says something about me as an author that one of the ways that I portray local color in my book is through food. Mainly it says that I get to eat a lot of good food for “research.”

Read about this and many other Columbus foods in my new mystery, Surreality, releasing next Tuesday.

Have a delicious weekend.