If I leave for work early enough, I don’t see them.

I can drive in total darkness, and though I know they are all around me, somehow I can keep my mind calm. I take back roads and places were lights are never on, but inevitably that means I am only surrounded by more of them.

The time change has been playing hell with my plans. Not only has it negatively affected my sleep schedule, but now the sun rises and I can’t even step outside my house before I see one. 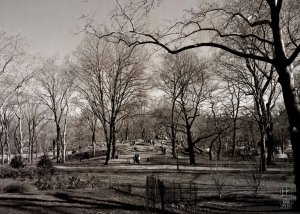 It doesn’t snow much where I live. With snow the pattern is blurred, the image less sharp. My mind can float between long patches of white and it never tries to land. Of course I know that each snowflake is one too, but it’s the trees that haunt me. The trees that demand my attention.

The sky is perpetual gray. It should have been spring weeks ago, but all we seem to have is winter. Every day it’s cold and my windshield is covered with a diffusion limited aggregate which I quickly try to dissolve with my heater. Then I drive and there’s L-system’s everywhere.

I don’t see the math. As good as I am, I’m a programmer after all, I don’t have the RAM to look at a tree and see how it was made. But I see the pattern, see each branch split and then split again, each part similar if not identical to the part that came before.

In the spring, summer and fall the leaves hide the pattern. Sure, there are iterated function systems for leaves but they’re too chaotic to nail down. They’re focused on numbers. L-systems, however, they’re just words, letters, commands. The mind is built on an L-system. The brain is a three-dimensional Hilbert curve. The lungs, an inversion of the trees I see every morning. Maybe that’s why they steal my breath away when I look at them.

I try to focus on the road, on the wavering yellow line, the cracked pavement, the dust on my dashboard. Anything to keep my world inside the car, into the few feet directly in front of me. Of course this isn’t a very safe way to drive, but somehow I manage.

Work is calmer. Desks, cabinets, tables, chairs, cups of coffee as long as it’s kept in a thermos where the steam cannot escape. It’s all so human, so Euclidean, so simple. Nothing is chaotic. Each day is a repetition of the one previous. Every conversation is a variation on the same couple of phrases. Each cubicle individual but the same, arranged in grids, with calm regular hallways.

The food is simpler too. Hamburgers in round disks. Fries in long rectangles, or tots in cylinders if the mood strikes. Anything organic has been homogenized, processed, packaged until it is comfortable for the human form to consume. Even the pi/4 radians of pizza.

I don’t like my work. I mean who does really? But it’s the only time I don’t really think about them. My building’s in an industrial park with lots of stark parking lots, and the few trees that are in the distance can only be seen from the windows of people with much better offices than mine.

But inevitably the day ends and I have one of those work places where people are actually encouraged to keep regular eight hour schedules so I can’t hide in my cubicle waiting for it to be dark again. Fortunately, there’s a bar right down the road. It’s surrounded by trees of course, but the windows are shuttered, the room kept dark for the TV’s and pool tables. I drink weak beer and wait, every now and again going outside for a cigarette to see if it’s safe to move again.

I really should quit smoking, but somehow the thought of what the habit is doing to those perfect bronchioles makes me smile, helps me to calm down. But the habit also forces me outside and outside is where they can find me.

The beer dulls the senses enough to put a haze on the world around me, further helping my efforts to stay inside the car. I don’t get drunk very easily, I’m a pretty big guy after all, but if I drink the right I amount I can dull my senses until I can get back to my house.

I sit in the living room again because I don’t have the courage to enter my office. My books are there. I could just get rid of them, after all they’re the reason any of this is happening in the first place. But knowledge isn’t something you can just package up and send out of your life. And those books call to me at night, dying to reveal their secret truths of the universe to which they have only given me a glimpse.

Instead I drown myself in the banality of reality television and game shows, eating the same frozen burrito every night for dinner. I go to bed, and I pray that my dreams are black, calm, silent.

And this is how I spend my days, or at least that’s how it’s been for the last three years. The world is an endlessly repeating self-similar place, and I’m beginning to wonder if things will be this way forever.