Fractals You Can Draw (The Dragon Curve or The Jurassic Fractal) 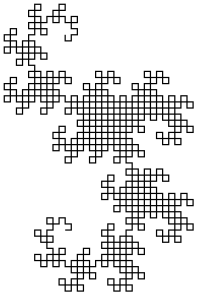 For Day Three of Fractal Week we have our youngest fractal, first described in the mid-sixties. This fractal curve goes by many names “The Harter-Heighway Dragon”, “The Dragon Curve” or “The Jurassic Park Fractal”. This last name refers to this fractal’s most well known appearance, on the section title pages in the book Jurassic Park, iterating a little more in each section. This is also probably the toughest fractal to draw this week, and also features our guest artist “The Little Red-Haired Girl.”

Step One: Draw a line. Rotate a copy of this line 90 degrees (clockwise) and attach it to the end of the first line.

The black line is our starting place, and the red line is the line we’ve rotated.

Step Two: We now have an L shaped line. Rotate a copy of this ENTIRE line 90 degrees, and attach it to the end as in Step 1.

The number of lines it takes to draw this fractal doubles with each iteration. It is important to always rotate a copy of the entire previous shape and attach it to the end of the previous iteration.

Step Three: We now have a backwards question mark. Rotate a copy of this ENTIRE line 90 degrees, and attach it to the end of the previous step.

Hopefully now you’re beginning to get the idea. This next iteration is where it gets a bit tricky.

As you can see our rotated segment intersects with the previous step to form a box. While the Dragon Curve never crosses itself, there are a number of intersections like the one in this step. 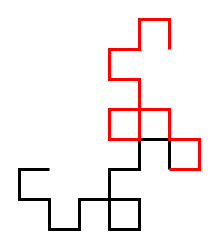 By five iterations we’re starting to get an idea of the whole shape. As in all of the previous drawings, the section in red is the rotated copy, and the black is the previous stage. Let’s see a couple more iterations: 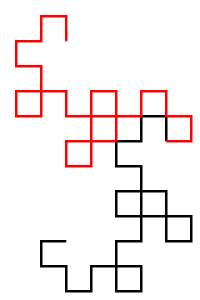 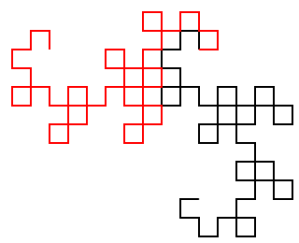 Here’s a drawing with two more repetitions or iterations (Stage 9 of the fractal, mirror image): 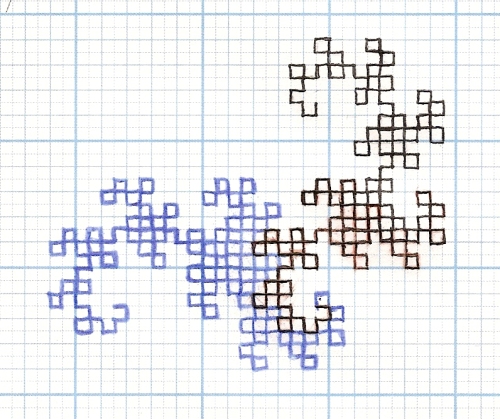 This fractal turned out to be very difficult to draw because of the number of times it curves back on itself. While the final product took only about 20-30 minutes to draw, both of us took a crack at it for hours. Two things are important in trying to do this yourself.

1) Draw the new stage in a different color or on a different piece of paper to always have the previous shape as a reference.

2) Remember you are rotating the entire previous step, and always attaching it to the end (like uncurling a ribbon). You want to maintain the same rotation and direction. 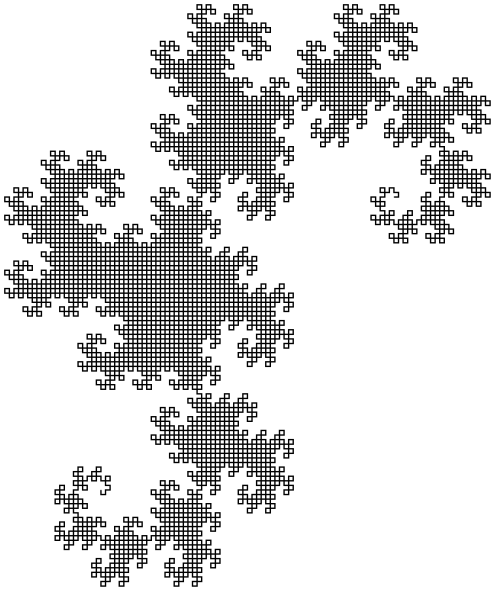 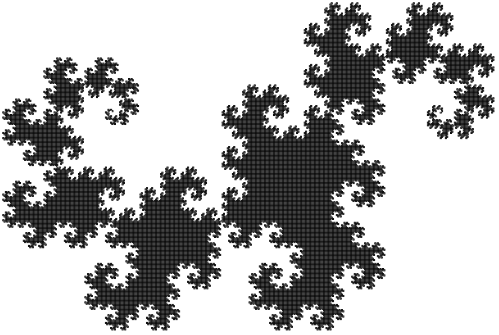 The Dragon Curve is an example of a space-filling curve and has a fractal dimension of 2. This essentially means the dragon fractal is a shape, a 2D object, despite the fact it is a curve that never crosses itself and does not meet at the ends.

Also, as you can see from our illustrations above, each new stage of the fractal contains two copies of the previous stage. This is a slightly different kind of self similarity to the Sierpinski Triangle and Koch Snowflake, which look exactly the same no matter how far you zoom in.

The Dragon curve, while not being exactly the same at all resolutions, still is constructed from previous iterations, and maintains the same basic shape.

Sidebar: Jeff Goldblum’s character in the movie Jurassic Park is a mathematician who specializes in Chaos Theory, related to the Chaos Game we played on Monday. While the Dragon Curve is a good choice for a book about dinosaurs, it is completely deterministic and not chaotic at all. The dragon will always be the same at various iterations. The Chaos Game, on the other hand, yields slightly different results each time, which resolve to the recognizable shape of the Sierpinski Triangle.

One more Fractal to go, our oldest fractal, The Hilbert curve. Any questions?