Fractals You Can Draw (The Koch Snowflake or Did It Really Snow In Cleveland In Late April?) 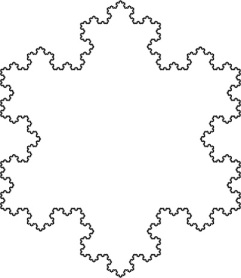 Our next fractal is the Koch Snowflake, based on the Koch curve, one of the first fractals ever described. The techniques used to construct the snowflake are similar to the ones used to measure coastlines, and will also provide us our first foray into fractal dimensions. The artist for this fractal is none other than “The Little Red-Haired Girl” who volunteered to draw several of the fractals you’ll see this week. 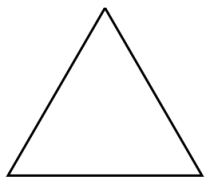 Step Two: Divide each side into thirds. Remove the middle third, and draw two sides of an equilateral triangle above the removed segment (connected to the other two). In other words, add a peak where the line used to be.

Step Three: Repeat step two on each side of the new shape (12 sides). 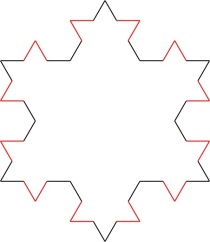 The overall shape now has 48 sides.

If we repeat the process one more time we’d get a shape with 192 sides. The drawing below takes this one more step, or iteration. It took about 3 hours to complete: 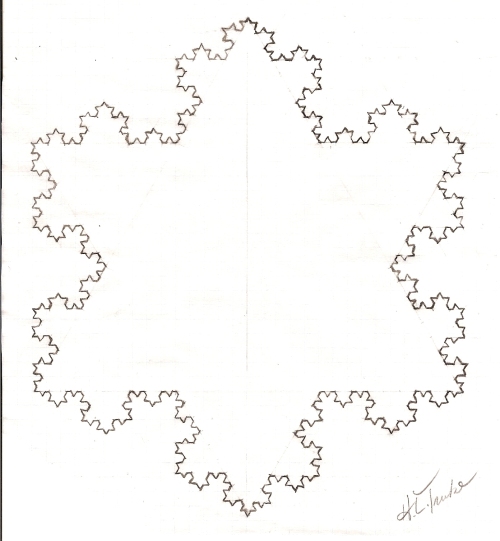 Like the Sierpinski the process is simple, but after a few repetitions we get an intricate snowflake.

Let’s consider one side of the original triangle. Is it a line, which is 1 dimensional, or a shape which is 2 dimensional? What is the length of the Koch curve?

But it’s not a shape either, in curve or snowflake form. Hence fractal dimensions.

The basic formula for a shape like the Koch curve is this:

N = the number of lines relative to the previous iteration. In this case N is 4.

r = the ratio of each line segment to the previous iteration. In this case r is 1/3.

Basically, fractal dimensions describe the relationship of previous iterations to the current one, and attempt to otherwise evaluate the degree of complexity of the iterated process. Though it would be difficult, the Koch curve can be drawn as a single line, without lifting your pencil, and without connecting the two ends. So it is a line, but an infinitely long line with self-similarity.

Fractal dimensions are a little hard to understand, but make a bit more sense when we get into space-filling curves like the Dragon and Hilbert curves.

Here’s another variant of the Koch curve, this one done with right angles:

We start with a straight line; divide it in thirds and draw a square in the middle third, removing the bottom side. For this we’d have N = 5, 5 new lines after each iteration, with r = 1/3, since each line segment equals 1/3 of the original. Hence our fractal dimension is log(5) / log(3) ≈1.4649.

Here are the next few stages of the fractal: 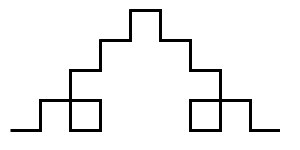 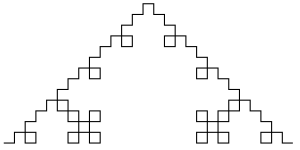 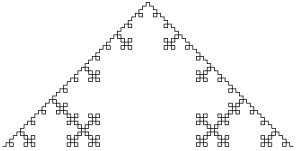 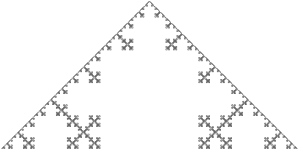 As you can see this fractal does seem to take up more area than the snowflake up above, hence the higher dimension. Some fractals have a dimension of 2 which makes them essentially shapes, yet shapes that are constructed from curves that bend back on themselves.

5 responses to “Fractals You Can Draw (The Koch Snowflake or Did It Really Snow In Cleveland In Late April?)”